Will there be any issue if i rename Object folders under main Object repository folder.

1.I would like to cleanup and consolidate Object folders and Object name.Will there be any problem?
2.What is the best approach while Recording web captures existing objects
Replace or Merge? 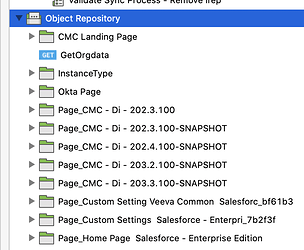 Main answer: I don’t know (for your situation).

That said, I’ve noticed some “helpful” behavior in Katalon in that, if when a test object is created, I click on the new test object and rename it, I am prompted to “save” my “changed” script, which then updates to use the new name I assigned the test object.

I always create a new subfolder when I do a subsequent recorder run. I’ve noticed that the script generated will use the folder name as part of the test object reference, so the script will say, e.g.:

Instead of simply “button(1)”.

My concern is that if you move objects around, you might have to update your scripts if they have embeddded references to the old test object path name.

You might try to make sure you have the script open that uses the test object you are making changes to - perhaps it will “notice” and do the updates for you. I’d say if you have multiple scripts using the same objects, all bets are off.

Caveat: I am doing Windows testing, not web testing, so YMMV.