I will try to implement this, Thanks for reply.

I tried to reproduce your case on my machine. I could. I think you, @p.kayam, made a small mistake. And Katalon Studio has a defect that confused you. Let me tell you what I did. 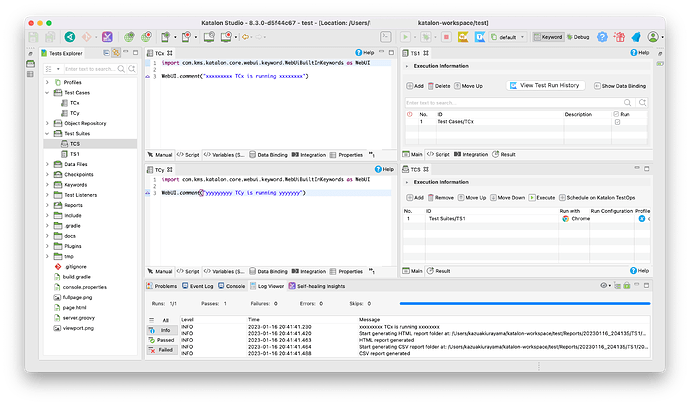 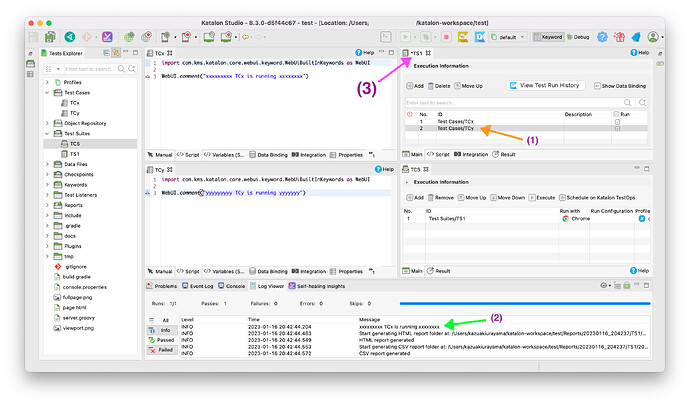 Explanation of scene B 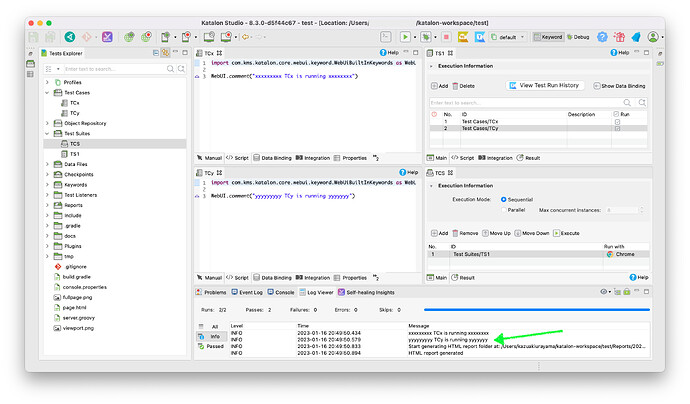 I guess, you forgot saving the changed Test Suite, didn’t you?

May not look professional, but I made a habit of using Ctrl-Shift-S vs Ctrl-S when using various apps.
Usually this saves me from headeache (but sometime creates additional troubles)
‘Save All’ vs ‘Save’ sometime make the difference, and those keybindings are most common used.

I think there is a small defect in Katalon Studio. When I tried to execute the TSC while the TS1 was unsaved, I think Katalon Studio should not have started executing the TSC with unsaved TS1.

May not look professional

IntelliJ IDEA, Visual Studio Code — these professional editors make sure that everything saved before user actions.

but I made a habit of using Ctrl-Shift-S vs Ctrl-S when using various apps.

For me it did.

I used your sample project for browsermobproxy.
I opened two testcases and the testsuite.

I did few changes in the testcases (added some comments)

Without saving, I ran the suite.

Well … i tested on linux, if it matters (and I am lazy to create a collection also) …

they did not implemented autosaving of Test Suite.

Ah … well, lazy to test that also, but probably you are right.
Will autosave testcases but this is the only test I did.
Indeed, looks like a bug to be considered.

r case on my machine. I co

I pulled changes of my colleague

After pulling the changes, did you close & reopen the project?

After pulling the changes, did you ever opened the new testcases in the Test Case editor in your Katalon Studio GUI?

Unless you manually open a test case script in GUI, Katalon Studio may not recognize that it has got a new script in the pulled project.

In my experience, unless given a chance to refresh, Katalon Studio often goes out of sync with files on disk. See the following ancient post:

I’ve noticed something similar. If I ever copy a project across to a bunch of VMs, some sessions of Katalon notice the changes and ask if I want to update them. Other’s don’t - they either update blindly with no report, or, rarely, don’t update at all. Whatever they’re using in the Java core for file system watching is flaky at best.

Katalon developer stated they have fixed this issue. But I believe there remain some edge cases where Katalon Studio gets out of sync with files on disk. I’ve got bored with this issue. I am not going to debate this bug any longer.

I would just repeat closing and reopening projects when necessary. Especially I always do close&reopen a project after pulling it from a Git remote repository. It’s a rule of thumb.

I pulled changes of my colleague in that there were some new testcases added in a test suite and that test suite is added in my test suite collection.

This is a different storry.
Did your colleague saved everything needed before comitting/pushing the changes?

To confirm this ‘bug’ additional test scenarios are needed …

I hope this is clear!

Actually, this brings more confusion on what you and your colleague did …

Did your colleague saved everything needed before comitting/pushing the changes?

are you sure about this statement?
do you know how git actually works?

I don’t think so.

Git looks at the files on disk only. Git does not communicate with Katalon Studio at all. Git never asks Katalon Studio to flush the changes you made.

I have tried this solution macos - Eclipse Auto Save before build? - Stack Overflow and I can autosave it. Hope this can help!
This is my reproduce - auto save.mov - Google Drive

Thank you for the information: we can configure Eclipse to save dirty files before “build”.

Will a dirty Test Suite be autosaved when a Test Suite Collection is executed?

Do you mean that in all these cases, provided that the autosave is configured ON, the dirty files will be saved by Katalon Studio before those actions?

Thank you for the information