Problem: No delay between actions

So I’m a total Katalon beginner, so I hope you can help me.
In Settings, I set the delay between actions to 1 sec which just works totally fine when using the usual “Open Browser” statement.

Anyway, it’s needed that the Katalon Extension for Chrome is activated in a Chrome window which Katalon opened.
To reach this, I copied the following code and and deleted the typical open browser statement.

Now, the delay isn’t existing anymore and without the delay the test is too fast, so that the test fails. It’s still set to 1 sec and still works without the code from above.

Does anyone has a solution to be able to use the Katalon Chrome Extension (to continue web recording of an existing test case) AND use the delay between actions?

Not sure I understand the problem completely. But you can insert specific delays (in seconds) anywhere:

I have a couple of cases where I’ve had to add a delay in between steps in Katalon.

You could try to record, then add a step in between and set that delay to 1 sec. Not sure how often you need the delay, but I’ve found I only need it in certain cases. 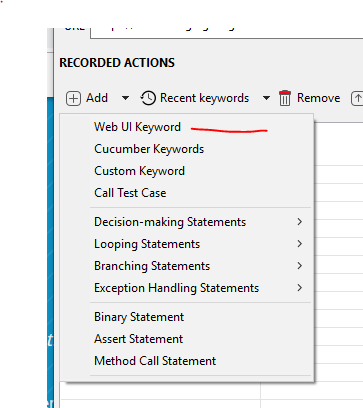 Once that adds another step, open up the selections and pick Delay 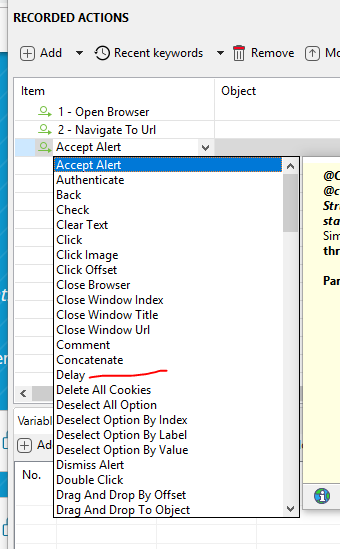 then, go to the Input column, double click and input how many seconds you want the delay to be.

Thank you for your fast replies!
So basically I need the delay between almost every action.
I attached two screenshot, you can see on one that the delay between actions is set to 1 sec and that’s missing on the other screenshot.
Is it possible to change the code that the automatical delay is still activated?

So basically I need the delay between almost every action.

I don’t believe you do. The script you posted probably only needs a specific delay in one or two places. Use the code I provided.

If I understood what you’re trying to do better, I could be more specific. There’s nothing wrong with your original post, I just don’t do that kind of testing so my experience (and therefore my advice) is limited.

The script you posted probably only needs a specific delay in one or two places. Use the code I provided.

I tend to agree with Russ on this one. I found that I don’t need delays between every step, just certain ones.

There might be a way to set it up in DesiredCapabilities, but I only use delays in certain spots so I’m not 100% sure there.