License requirements for multiple KRE executions from one node

I’ve run Test Cases in KS(E) in parallel many times. I’ve also run suites in parallel. I’ve never tried KRE like that. I guess you need as many KRE licenses as you have launched suites.

@ThanhTo can you confirm? Could I, for example, spawn say 5 KREs against 5 single suites on one system? Would that need 5 licenses or 1?

You would need 5 KRE licenses in that case. Multiple KRE licenses can bind into the same machine, but in any case every execution would take up one license.

@ThanhTo I don’t know yet what the problem is with the licensing model, but I just can’t get my head around it

Just before I quit for the night, @YoungNgo contacted me on Skype on a similar matter so I asked him the same question: 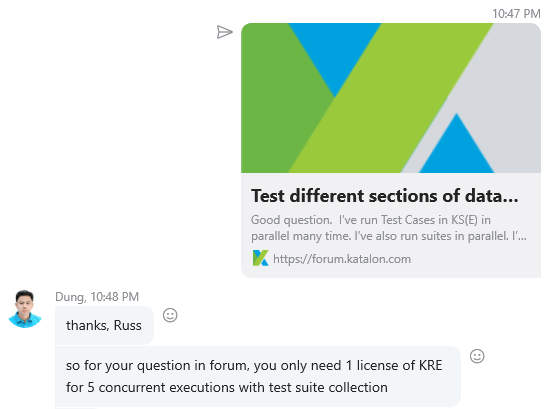 So it’s not just me. Even you guys can’t agree

So if you compared it to Selenium Grid - are you paying for the Hub or the Node? Is that the right analogy?

Let me clarify a bit. When @YoungNgo mentioned concurrent executions in a Test Suite Collection, he’s talking about Parallel Execution mode in a TSC. At somewhere else I explained already that it is not truly parallel, it is merely switching between multiple threads. This switching results in unstable test results.

When I referred to using 5 KR licenses, I was talking about true parallel execution, as in the execution instance are independent, and will scale as much as the infrastructure allows it to without affecting the stability. This choice would be the most beneficial to those who seek to have parallel executions to speed up the testing process without sacrificing stability, which I think is a lot of people.

The question of this thread has no Test Suite Collection mention in it so I didn’t consider this possibility. Sorry for that.

At somewhere else I explained already that it is not truly parallel, it is merely switching between multiple threads. This switching results in unstable test results.

Probably why when I reached 3 suites, the third never completed - 2 seemed fine but I never did get 3 to work.

When I referred to using 5 KR licenses, I was talking about true parallel execution, as in the execution instance are independent, and will scale as much as the infrastructure allows it to without affecting the stability.

I think that’s what I was asking about. Keeping it simple, starting 5 independent runs of KRE (probably batch files but could be anything) each launching their own katalonc.exe launches. One machine, one account, one me, 5 suite/katalonc executions “running together at the same time”.

Please double-confirm: THAT is 5 licenses - correct?

The question of this thread has no Test Suite Collection mention in it so I didn’t consider this possibility. Sorry for that.

Right. And that’s why the topic intrigued me. I’ve started multiple suite runs inside KSE a few times. I wondered what would happen (technically and license-wise) if I did the same with KRE.

Yes that is right, 5 independent KRE instances take up 5 licenses.

@Russ_Thomas and @ThanhTo Thank you so much for your fast and detailed explanation. I’m fairly new to Katalon, so forgive me if I repeat some of the information you have already explained.

I did intended to achieve this using the test suit collection but @ThanhTo believes there may be stability issues.

Let me detail a bit, My test case enters about 80 different fields into the system to create a client and with all the checks and waits takes around one minute for each row of data. That means if I ran 50 test cases together it would take me 12 hours to get all of the data in.

I hoped to run about 40 or 50 test cases each in its own test suit with a test collection that executes them in parallel. Would having a CPU that can handle the multi threading solve the reliability?

I hope this clarifies why having multiple licences in my case would quickly become very costly because I would need more than 5 or 10.

Sorry for making @Russ_Thomas and @ThanhTo repeat yourselves but could you please confirm that having multiple licences is the only way or could the test suite collection option work for me?

I can’t understand, according to what @Russ_Thomas and @ThanhTo says. I need 5 licenses to be able to run 5 runs of katalonc at the same time, but I have been testing this with a trial license that they give me when registering and all runs run without trouble.