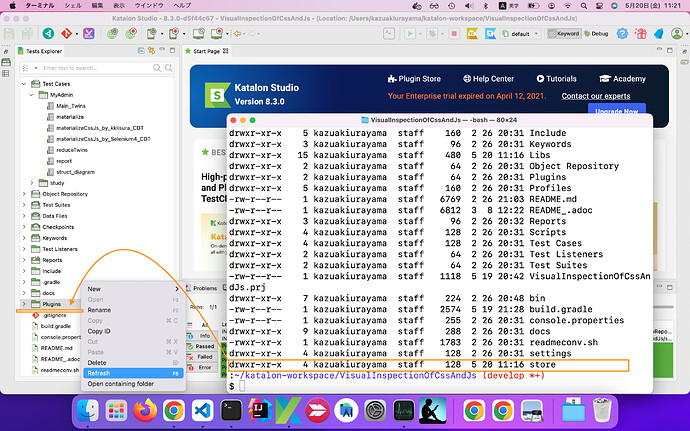 Before executing the script, the Test Explorer of Katalon Studio did not show the store folder (obviously because it is not yet there).

I ran the test case. I confirmed that the store folder has been created by ls -la command in Terminal.

I did “Reflesh” operation on the Tests Explorer.

Then, the store folder DID NOT come up in the Tests Explorer tree view.

Previously I raised a similar issue as this:

Please let us know what you are using Katalon Studio for? I have currently applied Katalon Studio in my project How would your work be affected if this issue has not been resolved? I can continue my job, but my performance is lower than expected Operating System macOS Monterey 12.1 Katalon Studio Version 8.2.0 Katalon Studio logs Not relevant report I have made a demo project at GitHub You can get the zip at Release first release · kazurayam/KatalonStudioDoesNotRecognizeExternal…

where I reported that “a file” is not shown. This issue has been fixed a t v8.3.0. I have confirmed that a “file” is displayed by “Reflesh”.

This time, I am saying a “folder” is not shown.

I re-tried this, and found, in v8.3.0, a folder <projectDir>/store created by a Test case was displayed in Tests Explorer by Reflesh operation.

It seems that the “Reflesh” sometimes works and sometimes doesn’t. I do not know precisely when.

There are 2 cases for “Refresh” in Test Explorer:

Please try the second one and let me know if it works.

KS only do the operation insider that folder.

This strictness just confuses me.

As I wrote in the the following post, I would rather KS to auto-save everything and auto-refresh everything all the time, as most IDE’s does (VSCode, IDEA, …)

Im using KS v8.2.5 on macOS 12.1. I can change Preferences > General > Editors > Autosave enabled [スクリーンショット 2022-02-06 23.24.34] But acutually Autosave never works. Does Katalon Team intentionally ignore this Autosave? @Jass @duylong Unfortunately Katalon Studio hangs sometimes; I have to forcibly quit it. Then I will lose unsaved code changes. I have got tired of clicking the SAVE ALL button. If “Autosave” is really enabled, it would make my time with KS easier.