Integration of Jira with Katalon for using Cucumber BDD

What I have done so far? 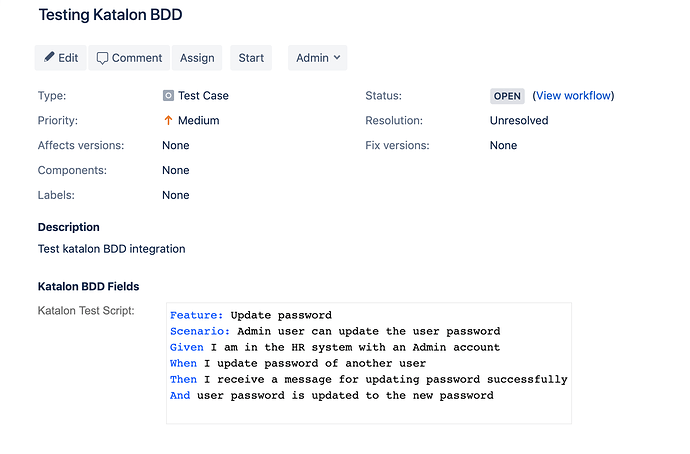 @Katalon_team Can anyone help me on this please

Any updates on this?

Any Updates on this?

I’m having the same issue. When I attempt to import a user story with bdd content (similar to your screenshot) - the Jira user story is imported but the only thing that is there is the jira issue id with a blank test case and a corresponding feature file (which does not contain the content on jira) - just a standard template.

The difference on my side is that we don’t mantain test cases on jira (so my issue type is story), we maintain them on Testlink.

i’m having the same issue too. I note that the feature file is empty in Katalon. Can you revise this situation too?

Sorry, @Surendrakumar et al, this seems to have slipped through the cracks.

This is not my field, but these guys might be able to help:

Let me confirm, what you mean by saying “Katalon BDD”.

“Katalon BDD” is a plugin for JIRA:

A simple and powerful test automation for Jira

Im not able to see the gherkin steps which i added in Jira in the feature file.

Could somebody kindly produce and share a sample project of Katalon Studio with which anyone can reproduce this problem? A JIRA instance that can run behind the sample project will be required at the same time.

It is a hard job for me to reproduce this problem simply because I do not have JIRA instance where I can play on. To be honest, I am not very much motivated to dig into this.

I would request Katalon Team who developed the “Katalon BDD plugin for JIRA” to look at this issue, as this issue might be caused by a hidden bug in the plugin.

I’m assessing Katalon to use in the company that I work for, and I have the same problem.
The integration between Katalon -> Jira is working fine, the problem is when I create a BDD on Gherkins_BDD field and try to download it on Katalon, the feature file that is created is just a sample, and not the BDD that I created on Jira.
There`s any idea if this problem will be fixed?

Is there any updates on the issue? Last comment is that this moved to Bug reports.
Our company considering to use Katalon Jira Integration plugin with BDD field in Jira, but since there is no solution for this issue, integration is questionable. Do you have any updates?
Thank you.

Any updates regarding this issue ?? What is the point of inserting the gherkins in the ticket when its not part of import to the katalon ?

A post was split to a new topic: Katalon/Jira > Gherkin support?