Getting Started with the Katalon Platform: Creating Your First Project

With the Standalone edition, you can store projects on your local system, which is suitable if your team wants to host all your testing infrastructure locally.

The Katalon Studio Platform edition, on the other hand, is seamlessly integrated with the Katalon Platform and Git. It allows you to easily leverage the available cloud resources to streamline your testing processes.

And to open a project in the Katalon Studio Platform edition, you first have to integrate the Git repository containing your testing project with the Katalon Platform.

How Users Benefit from the Katalon Platform

We believe there’s a widespread industrial shift to move to the cloud and use Git repositories for software development. It enables businesses and teams to enhance collaboration, move fast, and scale up. We developed the Katalon platform to be tightly tied to the software development and testing lifecycle, so Git integration is required. Please note that we also support Azure Repos, Bitbucket, and other types of repositories.

When teams move to the cloud and integrate their repositories with the Katalon platform, they can leverage cloud-based resources to optimize and streamline their test project setup, management, and collaboration. No more wasted time spent setting up local test environments, handling maintenance, or sharing artifacts across teams.

How to create your first project in Katalon Platform

We published a new course in Katalon Academy to help users understand the new Katalon Platform and open their first project in Katalon Studio Platform Edition. 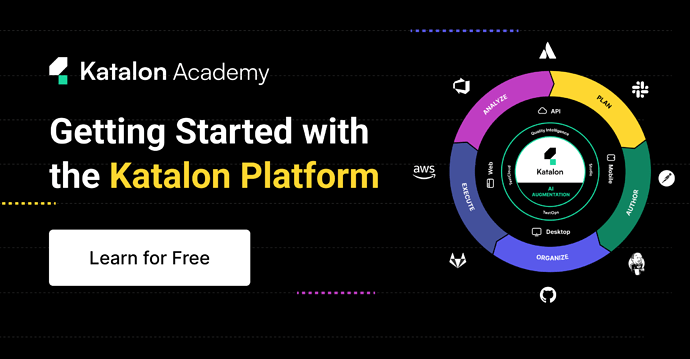 In around 20 minutes, the course: