I want to edit .gitignore and README.md of a Katalon project in Katalon Studio.

To accomplish this, I want to open an Eclipse Project Explorer in Katalon Studio as the following image shows: 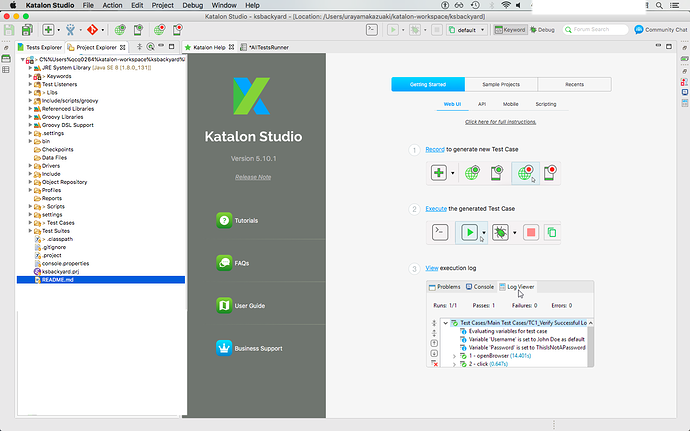 Project Explorer can be graded “for Geeks only”. Each project settings would have an option to enable/disable this. The default would be “disabled”.

Are you kidding? That’s a MARVELOUS idea!

Then, finally, I can open/edit anything! (well, it wouldn’t make sense to disallow any filetype, right?)

One day @devalex88 informed me how easy it is to open a Katalon Studio project with Eclipse.

In this tutorial, I will show you how to use IntelliJ IDEA to write Katalon Studio tests. Similar results can also be accomplished with other IDEs (Eclipse, VSCode) that understand the Eclipse project structure. Please note that this is not an official feature. Use this only if you really prefer your IDE. I hope this will somewhat help address a number of requests from Katalon Studio users, for example: Scripting, Executing, and Debugging My IntelliJ IDEA version is Community 2018.2, wh…

This post shocked me, and inspired me. Since then, a Katalon Studio project looks to me to be a censored(?) Eclipse project.

I find very little reason why Katalon Studio disallows user to open his/her project with Project Explorer and to let them edit README.md and other files using Eclipse-built-in editors. The only reason would be a risk for ignorant beginners to accidentally delete important files (*.class, .project, .classpath, etc) and post “NOTHING WORKS! PLS HELP ME”.

a bit dangerous for inexperienced users … but cute idea, because i like living on the edges

How about making Project Explorer require the .git dir to be in the project directory. If the .git is there, the user possibly knows GIT, and he/she can possibly restore any accidentally deleted files from the repository.

How about making Project Explorer require the .git dir to be in the project directory.

That would exclude people/projects that don’t use Git.

That would exclude people/projects that don’t use Git.

I think that people/projects that don’t use Git wouldn’t need Project Explorer in Katalon Studio anyway.

@Russ_Thomas, Do you need capability of editing Non-Katalon-native file types (*.js for example) in your projects which are not backed by Git? If yes, I would like to ask you how come you can live without Git.

I don’t live without Git. I live with SVN, too. And I don’t always get to choose <- that’s the point.

I live with SVN

Ah, I used to.
And I now remember that many of my collegues at work also live with SVN.

I added into our backlog and we will discuss it among the team.

Ability to open, read, edit and save arbitrary text files in Katalon Studio

As an advanced user, I want to be able to open, read, edit and save text files s…uch as Readme.md or .gitignore. https://forum.katalon.com/t/eclipse-project-explorer-tab-in-katalon-studio/19116

just as a side note, any operating system has a file manager …
and a ‘command prompt/terminal’ …
and plenty file editors …
just saying, i never trusted VCS integration in any tool I use. and i will never use such feature despite the fact i use a lot of tools with such feature built-in

but looking forward how this request will be implemented in Katalon. maybe one day i will change my mind …

There is in deed no reason to not show those files, it’s just that there are other things to be implemented or fixed, especially when other file editors are already freely available

. However, I agree that current file filters and context menus are trying too hard to hide away files and actions. We will surely lift these restrictions in future releases.

I want to open <project directory>/Materials/index.html with Eclipse-built-in web browser.

This file is the artifact of my Visual Testing in Katalon Studio project. I want to view it in Katalon Studio natively rather than going out to Mac Finder/Windows Explorer to click it to open with external browsers.

Windows Explore is a very much greedy software. When I open a folder <project>/Materials/ and click the index.html in it, the Explorer takes software lock for the file. If I execute other Java program (e.g., a test case in Katalon Studio) which tries to delete the index.html, a contention occurs. Windows OS does lock the file and force Java program not to delete it. In order to free the lock & contention between Windows OS and a Java process, I have to close Explorer, or in a worst case I have to stop and restart Windows OS. This problem is very annoying. Therefore I want to refrain from Windows Explorer as much as possible.

rather than going out to Finder/Windows Explorer to click it to open with external browsers.

Me too. My custom reports are a bunch of HTML files… that would be a much better workflow.

especially when other file editors are already freely available

You want to mention a lock & contention problem among multiple editors opening a single file, don’t you?

As @duyluong has mentioned in another topic, we are working on it for 6.1.3. (I deleted those messages because it is off-topic)

I am preparing a new release of my Visual Testing in Katalon Studio project. The project produces <katalonProjectDir>/Materials and Storage directory which contain a lot of PNG files, JSON files, and HTML files. KS v6.1.2 hides unrecognized resources in the project directory. KS v6.1.2 does not show those additive files which “Visual Testing in Katalon Studio” generate. Therefore I have to open Emacs to operate those files. Using 2 IDEs for a single project is just cumbersome.

I have a requirement. In v6.1.3, it it possible to select a *.html file and open it with Browser?

Opening a *.html with text editor is also required…

I think 6.1.3 will not have this capability - we will add it to our backlog.