Chrome Active Browser does not seem to work

After playing back a test case, I and many other users wish to use the “Chrome (Active Browser)” recording setting to start recording from a current session, but it does not seem to work. It always asks the user to install the Katalon Recorder and if you even manually get the Recorder.crx packed file to load in Chrome via some code, it does not talk back to the Katalon Server even though port 50000 is set on both and the extension is turned on. This is a major pain.

Here is a real world example of how this type of automation should work. In Photoshop, I can record an action… And I can playback this action and then continue recording from that point on. This is very useful.

Your product tends to force users to do this: They make a recording, save the test case. then they try to play the test case, they do another recording and try using “Chrome (Active Browser)” and it never ever does anything. The recorder does not register any clicks or text fields, nothing.

So this is what the user must do which is totally wrong for an automation tool: They have create a recording in a new session, pause the recording, and then they must manually enter clicks and keystrokes to get them to the point where they want to ‘continue’ the recording and then they can start back up.

I saw a workaround in the forums, but could not get it to work even through the Recorder.crx packed ext. would load, it would never sync back up with Katalon Studio.

I hope you can fix this very soon as this will help many many users.

First of all thanks for your feedbacks. However, I’ve tried to use that feature on my ‘Windows’ and it works well for me. So somehow there must be something wrong from your side, rather than a bug or misleading configurations.

You can ignore the installation of KR if you’ve already installed it from Chrome, there is an option to do that when you select this ‘Chrome (Active Browser)’. And also, we do not force users to do so by the way, we just provide some tools from Katalon Studio and users can adjust their actions based on that.

Can you point me more details about your current issue? 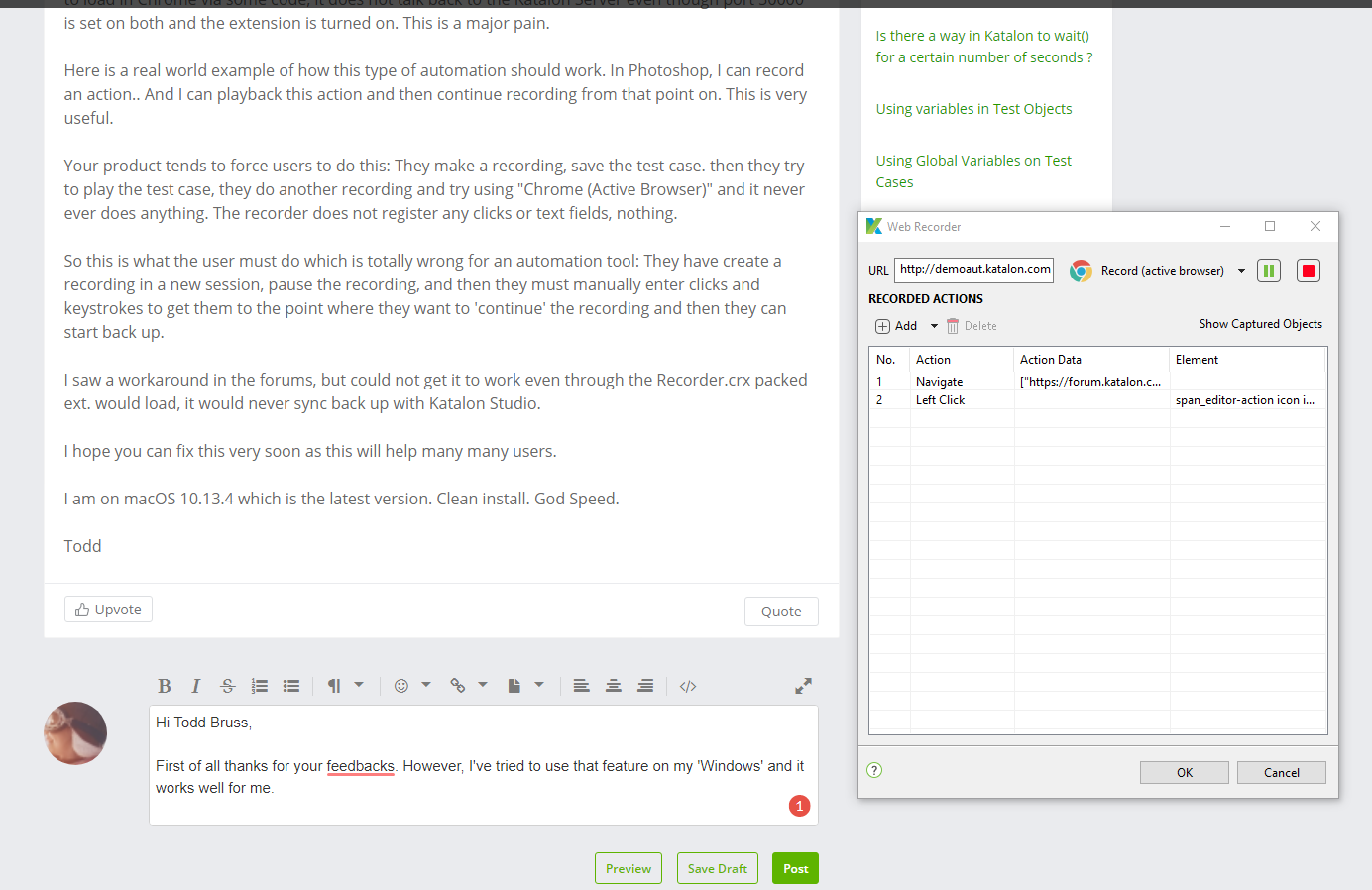 I’ve also tried it on Mac as well, so something must be wrong here :). Thanks for your information once you’ve provided it.

I’ve also tried it on Mac as well, so something must be wrong here :). Thanks for your information once you’ve provided it.

I was able to get this to work on the Mac. My issue was I was using the Recorder.crx that ships with Katalon Studio which does not seem to communicate back. Using the stock Recorder from Chrome’s Web store works. I just had to extract the download.

My remaining issue is the Katalon Recorder from Chrome’s website defaults to Katalon’s studios website. Is there a way to change the base URL to prevent the .CRX extension from to Katalon’s website and load my website instead?

I’ve resolved the remaining issue. I’m good. Thank you for your patience.

I am having this issue on Win7 machine. Can anyone help?
It works on my personal machine, however, in work machine it doesnt.