Hello,
Does Spy Utility support UTF-8?
When try to name object in Japanese ,it shows in Spy utility window but does not reflect to object repository.
Eg.
In Spy Utility Window : a_ 登録
In Object Repository : a_

Is there any specific settings required?Kindly help me with the solution.
Thank you.

Since Katalon Studio v7.1, you can name a Test Object with most of UNICODE characters including Japanese characters. See

I want to name TestObjects in my native language Feature Requests

Problem to solve Katalon Studio upto version 7 has an internationalization problem. I can not name a Test Object in my native language (ja_JP). When I try, Katalon Studio rejects it. [CannotNameItUsingJapaneseCharacters] This restriction frustrates me. October 1, 2019, the consumption tax rate will increase from 8% to 10%. Therefore many web developers in Japan are busy changing their web sites to make it complying to the new rate. I am involved as well. I have developped a lot of Katalon Stu…

Could you show us the HTML source of the target Web page? I want to see how the <a> tag with content 登録 looks like.

I guess, there could be some special characters there, for example <a>&nbsp;登録</a>, and it may have confused the tools.

Thank you for your reply and for sharing your post.
What I understand is, Katalon supports naming test artifacts, including Test Case, Test Object, Test Data File, Test Suite, Test Suite Collection, and Checkpoint with UTF-8 characters.

But I think it working fine within the Katalon project only.

Problem: -
While capturing an object in Spy web window, if the captured object has any Japanese character it shows blank space in the Object Name field, even we update Object Name manually it does not reflect the Japanese name into the object repository.

Regarding this, this name is not automatically captured, I have written it manually.
Sorry to confuse you.

Katalon Team would want to see the problem reproduced on their PC.
Is the URL of your target page a public one? Can I see it in the Internet?

Is the URL of your target page a public one? Can I see it in the Internet?

Unfortunately, it is not public.

I tried on https://www.amazon.co.jp/ ,
It can be reproducible using the above site.
Thank you.

I could reproduce it at https://www.mof.go.jp/ 財務省 Ministry of Finance, Japan with KS ver7.7.2 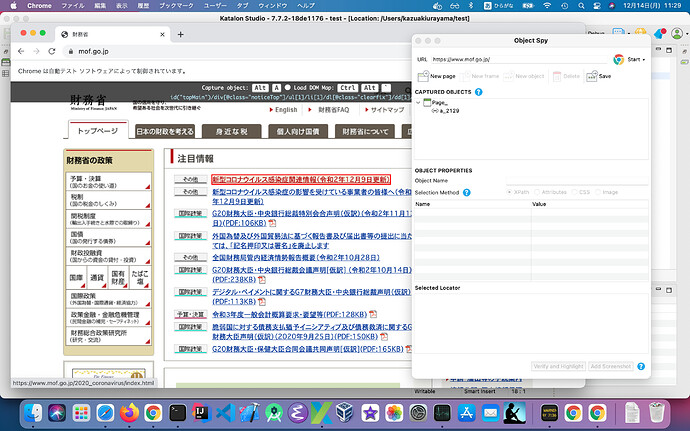 Then the Spy created a test object named

Apparently, the content text of the <a> tag 新型コロナウイルス感染症関連情報（令和2年12月9日更新） was translated into 2129. This is how Spy tool works at the moment. It is arguable I think.

I tried manually renaming the test object a_2129 to a longer name: 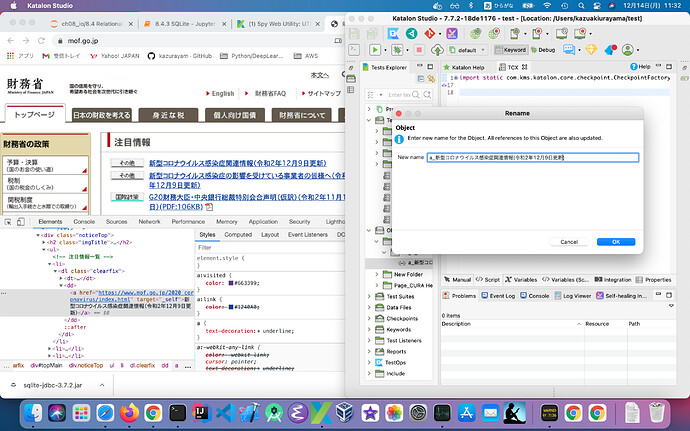 Yes, I could rename it to a_新型コロナウイルス感染症関連情報(令和2年12月9日更新). This is good enough.

Apparently, the context text of the <a> tag 新型コロナウイルス感染症関連情報（令和2年12月9日更新） was translated into 2129 .

I think you can avoid this unnecessary translation.

[quote=“kazurayam, post:7, topic:50200”]
Apparently, the context text of the <a> tag 新型コロナウイルス感染症関連情報（令和2年12月9日更新） was translated into 2129 .
[/quote]
I think you can avoid this unnecessary translation, don’t you?

I think, It does not translate it, these are the numbers which Spy web could read from this text -> 令和2年12月9日更新

You should be aware that you can not use a / character in the name of TestObject, because / is too special: a File path separator. Therefore, I suppose Katalon Studio may be changed at its best to generate a_IDPW（個人個人B), instead of a_ID/PW（個人/個人B).

Please be prepared, you would want to manually rename the auto-generated name anyway.

You should aware that you can not use a / character in the name of TestObject, because / is too special: a File path separator.

Thank you for reminding me.

That’s why I tried the following the way, even though it does not reflect in the object repository as expected .