Hi!
Im fairly new to Katalon Studio and i would like to ask something.

I’ve tried to search the problem im facing right now but i didnt find the answer in this forum, hope you guys can help me!

I tried to add a new object, which has the save parent frame and page with my previous object. When i’m about to save it, it shows that object’s already exist in the selected folder. 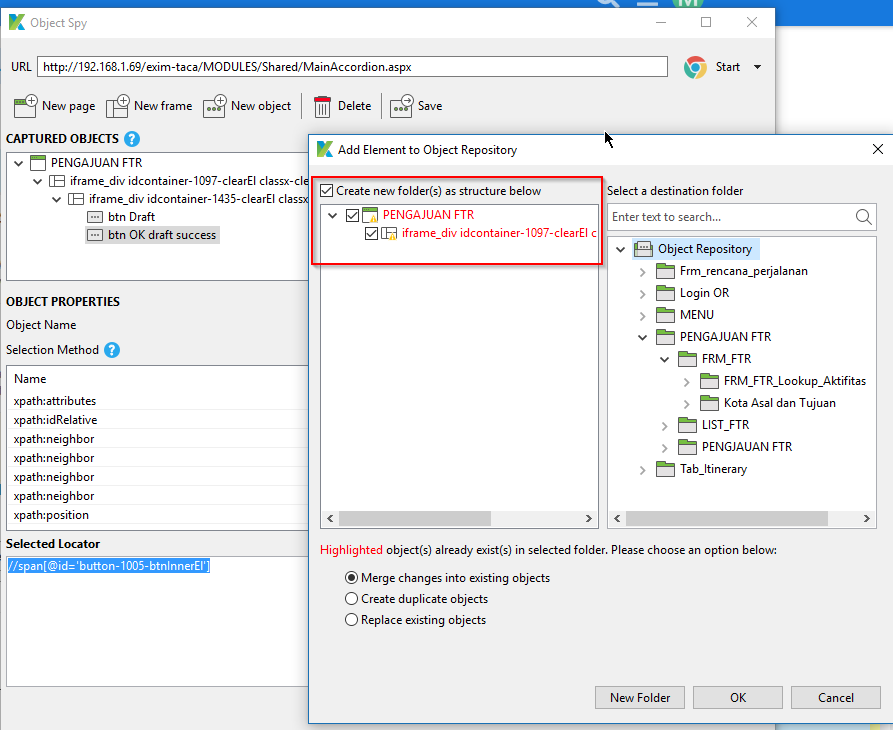 Here are my object folder: 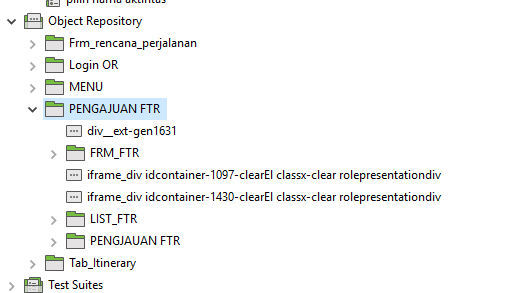 when i chose the ‘Merge changes into existing object’, the object, which are ‘btn Draft’ and ‘btn OK draft success’ dont appear in my object folder.

when i chose the ‘create duplicate objects’, the frame is duplicated, but still, the objects dont appear in my object folder.

Is there anything i did wrong?

Thankyou for your help!

What version of Katalon Studio are you using ?
Can you try other versions to see if this issue has always been present ? Can you also verify that this issue occurs only with iframe ?

i have tried using version 6.2.0 but i still cant add the new object unless i change the iframe name.
Yes, it only happens only with the iframe.

Hi @mrgooglee, I’ve been coming across this bug for a while now too and still haven’t found a solution. Have you found a workaround or solution for this?

I, along with some other people in my office, am having the identical problem on version 7.2.1. It only happens when I try to save new objects from a page that already has an iframe saved.

@Katalon Developers: can you prioritise a fix for this please?

This was the workaround provided by my team:

The last person suggested it’s when you already have an iframe object saved that it doesn’t update… In my case, I had two iframes and the only difference between the two was 1 appended to it. So I deleted all the test test cases and the objects associated with them and then it worked.

We bought Katalon to make it easier … manually deleting objects so that Katalon can work for different test cases is not a good option for us - we have a lot of different pages that use iFrames and it is part of our core test suites at this time.