In the bug report, I want to be shown fail test case, I do it on purpose just to see if it works, and all I get is error(yellow column) instead red(fail).

Here Null Pointer exception,
in the API request I did on purpose, to fail the test retrieving 400 not 200, and also I have another validation for a field which is also wrong, so the test can fail. How to solve this?
Thanks,
in advance.
Elena.

There’s an important distinction between a “failure” and an “error” in Katalon:

@Brandon_Hein,
thx for the answer.

I have one more question I do found how to be error and how to fail. Now I want to have analysis for few failed requests in the test suite and few passed cases. But why I only get 1 error case instead 2-3 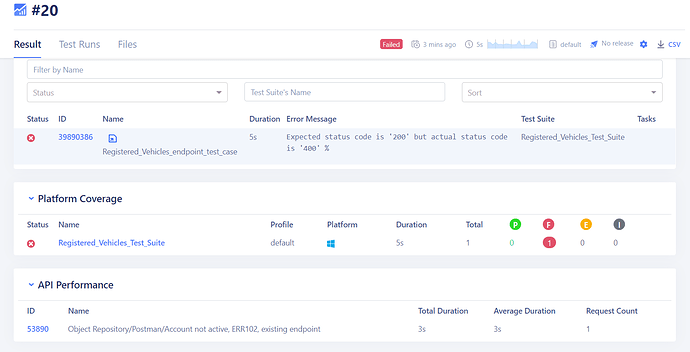 I only get for the first error info for the first request from the suite, and from other failed/passed tests not . How do I get a pie from all tests in the suite what has passed(green half) what hasn’t.
Thanks.

every case should be separate and then in test suite multiple cases
here it is: