Change Katalon Preferences from the outside

I’m in situation when I can’t change anything in Katalon Studio Preferences directly from the application.
Maybe somebody knows some work around like to replace some files or run a command line?

What do you mean? What exactly do you want to change?
Take a look at this thread, maybe there is something in it for you:

I can’t change anything in Katalon Studio Preferences

Tell us what you want to change?

@kazurayam, @Mate_Mrse, I want to make the “Automatically update Webdriver” checkbox to be checked (it’s not checked by default) 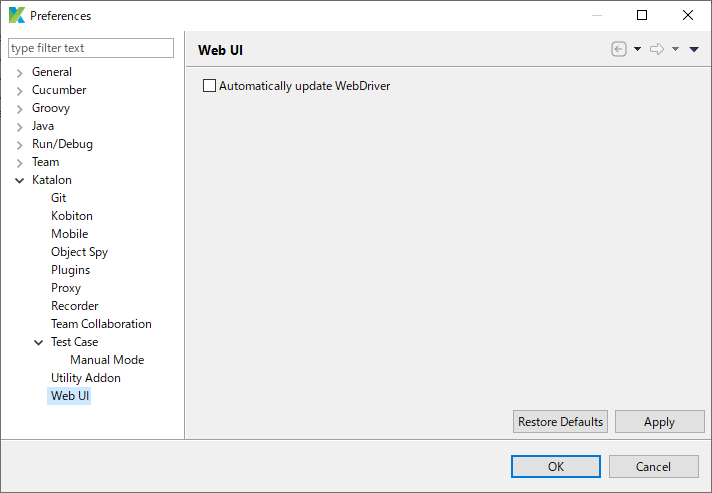 I have a simple question.

I can toggle ON the “Automatically update WebDriver” option and persist it somewhere. When I stop and restart Katalon Studio, I can confirm the option is ON.

Where in the file system of my PC this option is persisted? Where is the file which records that I require the Automatically update WebDriver option to be ON?

@kazurayam dig into users_name/katalon something on windows. there is a file somewere storing the activation. but options may be stored also with the location of the katalon instalation. i remember i saw once such file

May I know what you wanted to achieve with this ability?

Everyone please try KS 6.3.3. We’ve replaced the option with a command under Tools menu to let users update the WebDrivers only when they want to.

We are running tests on AWS machines. But now we can’t run Chrome tests because of the difference between chrome driver and chrome browser. I expect that it will solve my issue because replace the chromedriver file is not an option.

Do you execute Katalon Stuido on an instance of AWS EC2?

If yes, you should be able to login into the EC2 instance, start Katalon Studio manually, upgrade chromedriver on the instance manually. Once you have done, you do not have to repeat upgrading the driver.

Why don’t you do it?

That is the problem. Because every night we create new aws machine from scratch, unzip Katalon and execute tests with cmd. And now I have no idea how to do it with new version of Katalon where you can upgrade the driver only by request (6.3.3)

I suppose you create a new EC2 instance using an AMI (Amazon Machine Image) created and provided by AWS, which has OS only and no Katalon Studio and chrome driver installed.

You should note that

How to create your custom AMI? How to instanciate a new EC2 using your own AMI?

Now you need to dive into AWS documentations. You have a lot to enjoy! — at least a month, I presume. Don’t make haste.

I haven’t tried this approach but …

you can use Katalon Docker image with AWS Elastic Beanstalk or ECS. Using docker would be far easier than instanciating EC2 with custom AMIs. But obviously you find a lot more to learn — what is docker?

For CLI please use --config -webui.autoUpdateDrivers=true

Guide on how to update WebDriver automatically.

fo CI running,particularly with agents created ‘on-the-fly’, using docker is the best aproach, to keep the environment consistent. i would do also a custom image in own registry/repo, so you can have more control on the katalon version.
we are in the era of containers, guys … this is what clouds are made of those days …

Thank you very much, it was exactly what I needed.