6. Observe that the test does not start and that there is an error about Xcode version 0.0 not being supported.

The tests should run if Xcode 10 is installed.

The test does not start and that there is an error about Xcode version 0.0 not being supported.

[iOS][Configuration] Is there any specific requirement version of xcode to run the Katalon for mobile iOS testing?
Chris_Trevarthen October 1, 2018, 9:26pm #2

Thanks for this Chris. This was driving me crazy for a while. You don’t happen to know know approx if/when a version to support xcode 10 will be released, do you?

Hi Thomas, unfortunately, I don’t have any insight into the Katalon release schedule.

is there any update on this issue? where is the Katalon support team?

Since this is coming up more often, here is a more detailed explanation of the workaround:

Does the latest katalon Studio version support the xcode 10.1 and ios 12 on MAC Mobile Testing

Hi @Dino That’s an interesting error because the UDID is supposed to be something like 0A882FFF-10CC-43C2-896E-E83CA5DBE295, not 9.7-inch. Could you share a screenshot of what your Katalon Studio’s Project settings are? Namely the Project Settings->Desired Capabilities->Mobile->iOS screen? Mine looks something like this at the top: [10%20PM] Here are the steps that worked for me to create an app in Xcode 10 but test in Katalon Studio (Xcode 9.4.1): Install both Xcode 9.4.1 and Xcode 10 (mak…

Hi, Chris
i’ve got problem when running the IPA to real device,
i’ve follow your step to downgrade to XCode but error shown like to screenshot, can you help me? 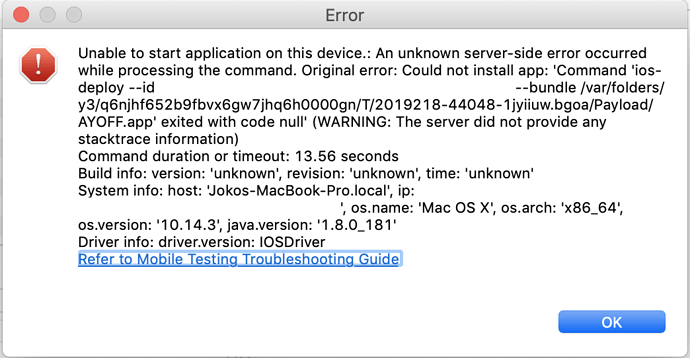 After my original post, it was brought to my attention that Katalon can support Xcode 10 now if we use Appium 1.8.2-beta. So, you don’t need to maintain 2 versions of Xcode any more - you can get rid of the Xcode 9.4 version if it’s less confusing that way.

If you have Xcode 10 installed in your /Applications/Xcode location, you can select it on the command line with:

If you’re still having issues, please check out this forum post with several troubleshooting steps:

Mobile Testing Exception Troubleshooting Tips Here are some common troubleshooting steps to take when you encounter errors trying to spy, record, or execute a mobile test in Katalon Studio: If you see one of the following exceptions, you should check your Appium installation: Execution Exception NullPointerException “java.util.HashMap cannot be cast to org.openqa.selenium.WebElement” “Unable to parse remote response” “Support for xcode 0.1 is not supported. please upgrade to version 7.3 or hig…

If none of those options work, please let me know.

I’ve install appium 1.8.2-beta, but error still same like before
is there another way to fix this?

Do you have access to the source code for the application? Are you able to build and run it on a simulator through Xcode? That might be a good first step.

If you are able to run it in Xcode, another issue could be that IPA files are usually built for real device architectures and code signed, so if you are trying to run an IPA on a simulator on your machine, it might not be compatible. In that case you would definitely need a .app file built for a simulator in order to test.