I am using Katalon Web Recorder to generate test cases. I am working in version 5.4.2 on a PC. I have been using the recorder all day without error. However, I just went to create a test case user the recorder in chrome. Katalon recognized the steps, seemed to record them, and prompted me to place the recorded objects in the object repository. However, once I selected the designated folder, I was given an error message saying “cannot generate test steps”. I was doing nothing differently that I had been earlier today when it was working just fine.

I tried to do the same exact thing in Firefox. Once the Firefox recorder opened, I was immediately given the smaller error message (see picture attached). I have found nothing on the internet to diagnose this problem so I am reaching out here. This is a large problem considering I am currently creating lengthy cases and the recorder is the best way for me to do this.

I have closed and reopened Katalon, and restarted my computer to no avail.

Any help would be greatly appreciated! 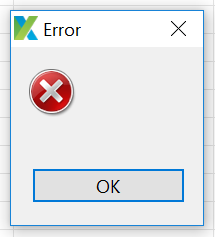 Can you check that the folder you are saving to is in Katalon?

Also, what pervious version where you on when it worked?

That is the key point of the trouble I’m having- I had not changed anything with Katalon to prompt the recorder to stop working. I had been working in the same version (5.4.2) successfully for several days, up until the morning that it stopped recording. The only “change” that I made was pushing my changes to the organization Git repo, however, even after I did that, the Katalon recorder was working successfully and recorded at least 5 cases with no error. This truly appears to have happened just “out of the blue”.

Can you try to create a web recoding of another website, something really simple like google search, get some basic actions like click, double click, pressing enter and then stopping the recording, and saving it? Do you still get the same error?

I was able to resolve the issue by uninstalling and reinstalling Katalon, although it only worked after the second uninstall/reinstall. Hopefully it stays working!

Thank you for your input and suggestions!