Am I missing something here or is it possible to have the video report be uploaded to Katalon Analytics under attachments as well?

@s.long I don’t think the recorded video is supposed to show up there. If they attach videos over there then it would take a lot of space on the server increasing the cost that Katalon may need to pay to AWS. At the same time we are using it for free. But the Images should show up there.

The video not showing up is just my assumption. Some one from Katalon team itself might be able to answer this

@s.long @manpreet.mukkar We will have this feature soon. We allowed videos to be uploaded to Katalon Analytics recently but the UI has not been finished yet.

@manpreet.mukkar Yes - cost was one of the reasons but we’ll offer it for free since videos make debugging a lot easier esp. when running Katalon Studio with Docker.

@devalex88 Thanks for answering this.

Videos are now being uploaded to Katalon TestOps and can be found in the “Files”-Section of a TestSuite run, but if I access a failed Testcase from the “Result” tab by clicking on it’s ID the video is not linked under the “Attachments” headline. Only the screenshots and two .txt-files are shown there.
Is it supposed to be like this?
It’s inconvenient to search for the video in the “Files” section because I first have to find out which position/number the failed testcase has in the test suite, then search for the right file called like “test_1.avi”, “test_2.avi” in the Files section.

It would be really nice if you could add a direct link to the video of a failed testcase to the Attachments section here: 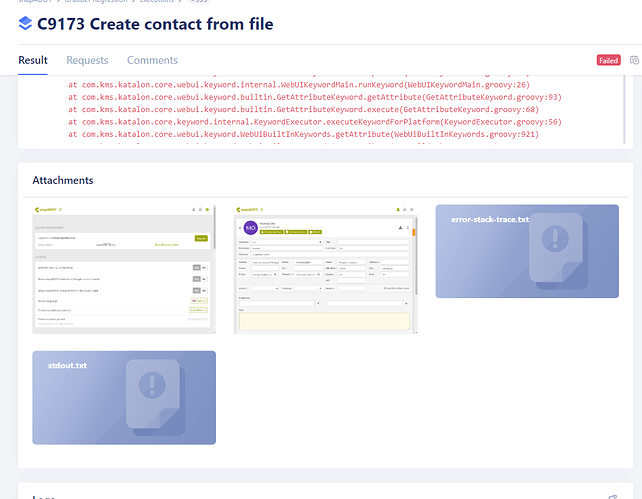 May I ask what is your current version of Katalon Studio?
Since Katalon Studio 7.0, videos uploaded to TestOps are attached to their corresponding Test Runs.

thanks for your answer.
We’re using Katalon 6.
So an update should solve the problem.
Thanks a lot.