Various processes not being cleaned up after execution

When we execute our Test Suite Collections using Runtime, it looks like various processes build up over time that eventually seem to affect execution negatively.

For example, we regularly see build-ups of ‘Node.js Javascript Runtime’ and ‘Console Window Host’ in Task Manager. The machine we see these on is essentially dedicated to Katalon Runtime, so we don’t believe anything else could account for these, and we believe our mobile tests are most likely related. 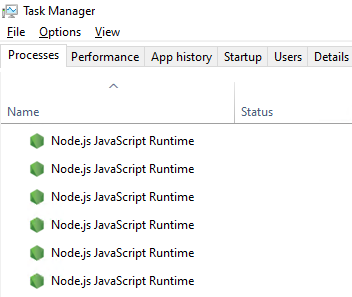 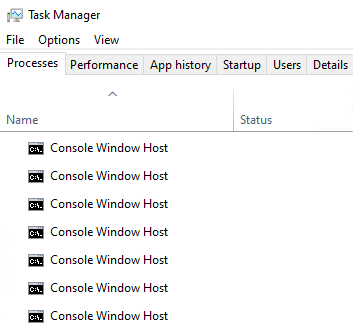 If it’s relevant, we have the option ‘Terminate drives after each Test Suite’ enabled in the Project settings.

For your information, we use a ‘Close Application’ test step at the end of each set of tests.

Please can this be resolved so that processes are cleaned up after each execution and this build-up doesn’t occur?

There comes a point (which we have experienced a number of times) where tests simply fail to execute at all when this build-up is sufficient.

Have you tried updating to version 8.4.1 and see whether this fixes the problem? If not, then we will submit a ticket to the Product Team for them to investigate this issue.

@chen.lee Thank you for your response.

I haven’t tried updating to version 8.4.1 yet, and whilst I may consider this, could you first explain how updating Katalon Studio could affect this issue bearing in mind that the problem occurs only when using the Katalon Runtime Engine please?

how updating Katalon Studio could affect this issue bearing in mind that the problem occurs only when using the Katalon Runtime Engine please?

but I doubt this issue is handled with the newest version.
As a workaround, you can use a wrapping script to kill all node processes before your execution start, something like taskkill /im node.exe
(or execute that from your test code, e.g from a BeforeSuite listener)

I’d be happy to update Runtime (or Studio if this issue has been addressed), but less keen to do so unless there’s a change that does/could address this (like you, I doubt this is issue is resolved in the latest versions, but happy to be proved wrong!).

Thanks for the workaround idea - our current workaround is to restart the server on a regular basis, but obviously a real solution to address this would be preferred but your workaround may be better than our current one.

@chen.lee unless there is a specific change that does/could address this issue (in either Runtime or Studio), please can you submit a ticket to the Product Team for them to investigate this issue?

From the version doc Version 8.x | Katalon Docs, I don’t see any mention of the issue being addressed. I did submit this issue for the Customer Support Team to test it out on Runtime to see if they can reproduce the issue.

The Customer Support Team managed to reproduce the problem that even stopping the execution and closing Katalon, ‘Node.js Javascript Runtime’ and ‘Console Window Host’ still show in Task Manager.

They are not sure if it’s related to Katalon because Any .exe file can be marked as “requires console” when it is compiled, and any such console-based program will cause a Conhost instance to be spawned – it could be cmd.exe, it could be PowerShell, it could be Python, it could be something entirely different.

I would take this issue up to the Product Team to further investigate and see their response.

@chen.lee thank you for your responses, your support is very much appreciated.

Obviously I can’t be 100% sure whether these processes are directly related to Katalon, particularly with the Console Window Host, but what I can be certain is that the only application that could be launching anything to do with node.js on our ‘execution machine’ is Katalon/Runtime , and whenever I’ve checked and seen instances of node.js left behind in the task manager, there has always been a similar number of Console Window Host items in the task manager too.

Thank you for taking the issue up with the Product Team, and I await your response.

@kevin.mcandrew1, I got a response from the Product Manager. The investigation is in process and will be in Katalon’s future roadmap. It will probably be released in a new version in 2023 that will fix this problem.

@chen.lee thank you for your response. Whilst it’s great that you are investigating and that a fix is in the roadmap, is there any way this could be prioritised slightly higher than 2023 please?

In our experience, these processes tend to get left behind when our application is closed unexpectedly mid-test. We don’t know if this is caused by an appium issue or an adb issue (or some other Katalon related issue), but we don’t believe the crashes are because of a fault with our app that we test (we’ve observed it with other third party apps too). We have previously seen errors like ‘org.openqa.selenium.WebDriverException: Connection refused: connect’ that appear to correlate to the app closing unexpectedly, but whether that is always the cause is unknown.

But I suppose what I’m trying to say is that as this issue appears to be caused by app crashes that appear to be caused by Katalon or Katalon related services, would it be possible to promote this up the list please?