TestSuit takes up a lot of RAM

how to reduce the occupied space in RAM?

when it is executed it takes 450mb of RAM

I think 450MB is not large at all. Katalon Studio allows 2048MB as maximum virtual memory size as default for usual cases. See

you will find a line 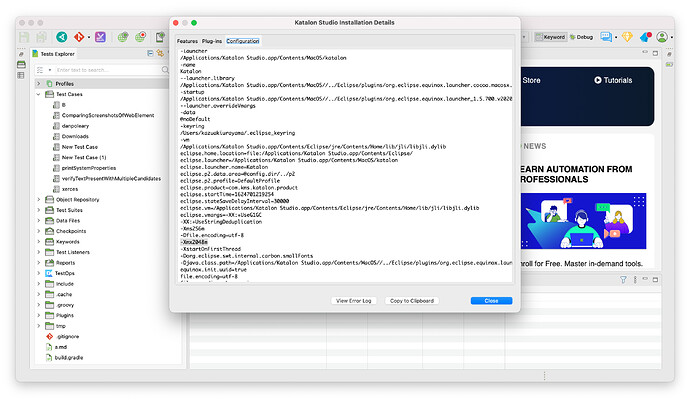 I don’t think you should worry about 450MB of memory usage too much.

Of course, there are a lot of performance analyzer for JVM application. For example, I have ever used VisualVM which is bundled in the standard JDK for free. However it is not very easy. I do not think you should look at these performance analyzers unless you really encounter a serious memory leak (say, your OS process consumes 5GB, 10GB or more).

In my humble opinion, 1000 code lines of a Test Case is too large to maintain in long term.

Please share some screenshots when monitoring the suite. Does this test suite load data from Data Files?

if you need memory larger than 4500mb, then you can write in the katalon.ini file

You can allocate large enough virtual memory as long as your machine’s physical memory can accommodate it. See also