Out of the blue I’m having issues where I kick off my Katalon Script, and before it completes the Recorder has closed and is no longer showing up with my other extensions. When I navigate to the extension manager (this is on Chrome), Chrome is reporting the plugin may be corrupted. Was there a recent update to the extension that may be causing this? I’m going to try again from another machine, but this has literally happened to me three times today and I have no real useful info or idea how to debug this. I support a couple of products, the older version is using the Recorder for automation and the other I’m using Katalon Studio. It would be a nightmare to start these scripts over. 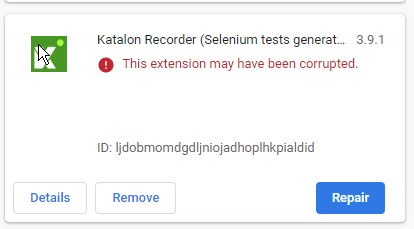 This happened to me on a separate machine as well (same script). I’m not doing anything fancy in the scripts so I don’t know what is going on.

I found where I could capture some errors for the extension, I have to be honest I don’t know if this is useful or not. But, I’ve tried many times now and the same thing keeps happening. Where it crashes is not consistent, sometimes it may run for 5 minutes, other time more or less. 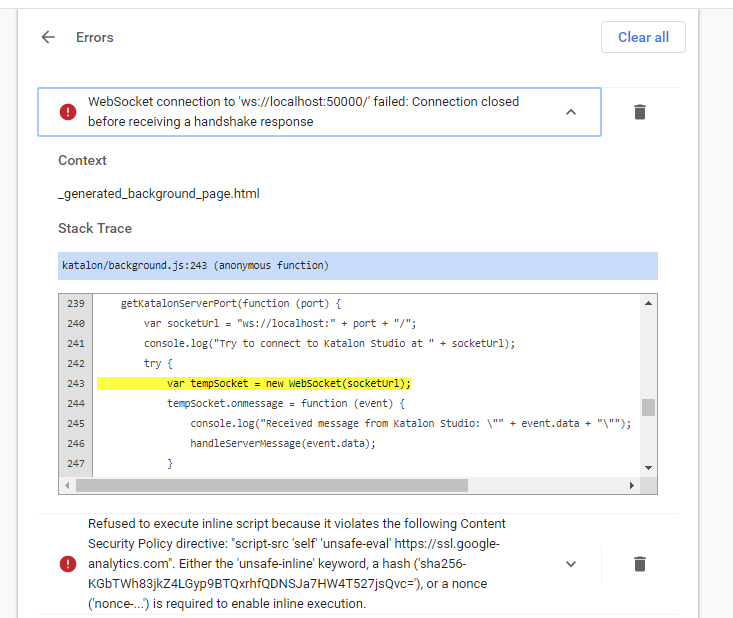 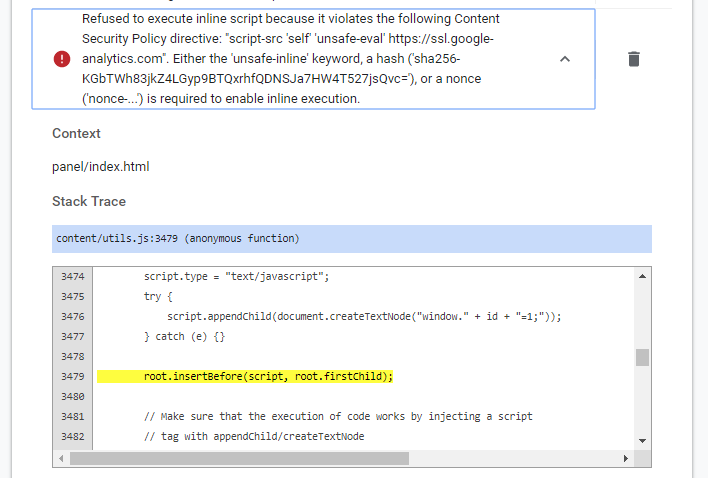 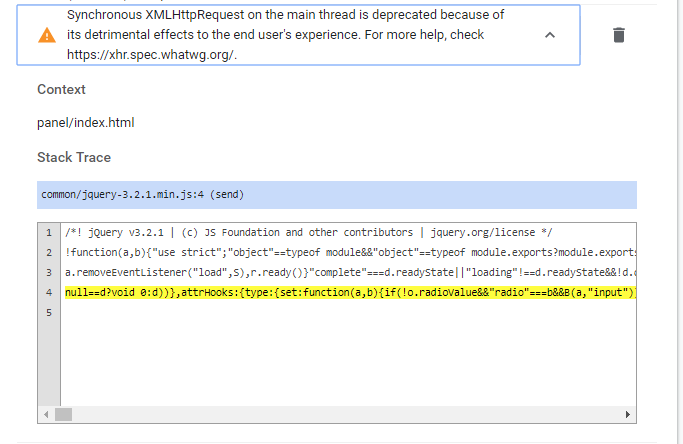 I have been experiencing this issue as well. Katalon Chrome Extension is reporting as corrupt and I have to repair it to use it.

Let me help you out since nobody responded to me (I know, everybody is busy, I get it). I found the solution to my problem actually documented on the Katalon Recorder FAQ page (I just wish somebody had told me about this). I can’t guarantee you have the same issue as me, but based on the error report I was able to pull from the extension this was spot one with what I was experiencing: https://docs.katalon.com/katalon-recorder/docs/faq-and-troubleshooting-instructions.html

Check out the last topic on that page. Basically you will need to disable the Content Security Policies that are built into Chrome (or Firefox).

You may or may not be familiar with what these settings do so here’s a synopsis pulled off of a google search.

Content Security Policy (CSP) is an added layer of security that helps to detect and mitigate certain types of attacks, including Cross Site Scripting (XSS) and data injection attacks. These attacks are used for everything from data theft to site defacement to distribution of malware.

Bottom line is to get around the issue (assuming you have the same issue I do) you have to turn off important protections built into your browser. This is fine as long as you are just running your tests, but be sure to re-enable the CSP when you are not running tests.

Since I’ve installed the extension they recommend to toggle the CSP settings on and off, I have not had another crash. I don’t know why this literally started happening out of the blue this past week. Maybe an update was pushed to our work computers that made Chrome pay closer attention. So weird but at least there’s a work around (for me).

Hope this helps you!

One last thing, if you want to capture what is going on when your Katalon Recorder crashes, right click on the extension, go to manage, in the settings toggle on the capture error feature. If/when the extension crashes and shows up as corrupted you should see an option to view errors:

Ugh, what a bummer. I am familiar with CSP and I really hate the idea of disabling them, for many reasons, not the least of which being that I have a very particular policy setup on the app I’m building and I want to make sure I don’t violate my own standards when I’m testing.

I’m at least going to start collecting errors, thanks for that info. For now, I guess I’ll just keep repairing as needed