I am stuck in a process where simulator , even if up and running, is not visible in Katalon Studio. The same is visible and working in Xcode. Kindly help on the same on urgent basis.

Can you confirm a few things?

If you don’t see anything from the xcode-select command, you’ll need to make sure you set a default Xcode version:

Hi Chris
Thanks for replying. The details are as under :

Actually I was able to view all the simulators in my Katalon studio local devices list when I installed it. But later, when I made changes to in appium configurations by installing Carthage and so on, the simulators are no more visible in Katalon.

Your xcode-select command output looks like it might cause you problems. Can you try running the command:

And see if that helps?

Thank you so much Chris. It worked like a charm. Can you please throw some light on the root cause of the problem along with function of above mentioned command ?

Xcode has a number of tools that come with it, including the simulators. Other programs, like Katalon Studio, rely on those tools to get lists of simulators using the command

In order to prevent hardcoding of the Xcode app path (and support multiple versions of Xcode on one machine), xcode-select is used to point to the currently desired version.

Installing new versions of Xcode (and sometimes other system tools) can mess up that xcode-select path, so we need to reset it to the correct one.

One thing to note: Katalon Studio doesn’t support Xcode 10 yet, so you will need to install an older version on your machine as well (which is where xcode-select becomes very handy).

You’ll have to install an older version (9.4.1 is what I have) alongside Xcode 10. You can do this by going to https://developer.apple.com/download/more/ and downloading the older one.

You’ll be asked to “Keep Both” when you install - do that. I named mine “Xcode_9.4.app”. Then you’ll have to set the default version to the older version:

Now you can use Xcode 10 to develop, but still run Katalon Studio.

I’m not sure i’d recommend it for everything because its a beta version, but it you absolutely have to run xcode 10 with Katalon you can upgrade appium to ver 1.8.2beta. That version supports the latest xcode versioning scheme, but is still compatible with the way katalon interacts with appium.

invalid developer directory appear when i run this command

Do you have Xcode installed? If so, can you try running:

to print out the current location?

Can you try running this in your Terminal: 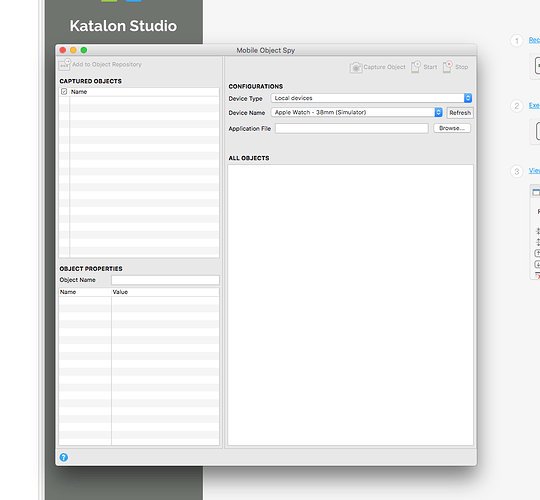 What devices do you see? Is it only watches? Make sure you restart Katalon Studio after running those xcode commands.

You can try to run this from the command line to see if your system actually sees a list of phone simulators:

If that shows you the device you expect, but you can’t see it in Katalon, you can try some of these troubleshooting tips:

Hi Aaron, This is a problem that a lot of people come across, and so far I don’t have a definitive solution. Here are a few things you can try: First, make sure you follow the steps from the Katalon documentation for setting up the WebDriverAgent: https://docs.katalon.com/katalon-studio/docs/installing-webdriveragent-for-ios-devices.html Similar documentation from Appium about real device setup: https://github.com/appium/appium-xcuitest-driver/blob/master/docs/real-device-config.md Verify/s…

This Error appears to me
Testing failed:

Are you able to open the WebDriverAgent project in Xcode? Does it build correctly on a simulator (using CMD+B)? Or do you see errors?