Here I am NOT going to claim a bug.

I just record a problem I encountered and describe the reasons

I have found out. I hope this helps someone who encountered similar problem.

On my PC in the office,

- The test case fails after waiting for 60 seconds. Message: 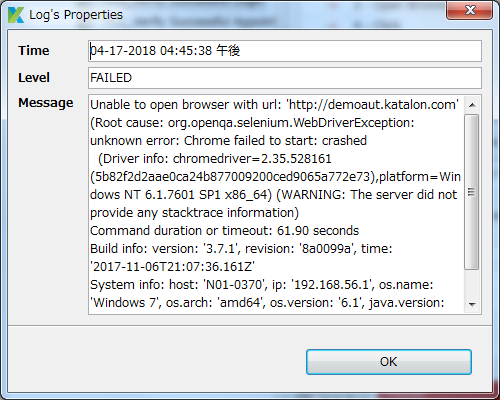 # What I have found

I found 2 reasons unique to my PC.

1. The PC is a property of the Corporation I work for. It was setup by the Administration team.

Chrome browser was installed by them.

2. On my PC I found Chrome installed in multiple locations.

3. The Chrome under the `Program Files` directory runs OK.

4. The Chrome under the `AppData` directory was somehow corrupted. When I tried to execute it in the command line, it crashed.

5. I collected chromedriver.log. In there I found following record:

6. This record implies that the chrome driver wanted

to start Chrome under the `AppData` directory which is corrupted and never runs.

7. I checked the [source code of chromedriver](chromedriver/chrome_finder.cc at main · bayandin/chromedriver · GitHub) and found that

actually chromedriver gives higher precedence to the one under `AppData`.

My fix was to avoid the corrupted Chrome by renaming the `Application` directory to \_Application\_.

Once the corrupted Chrome has been removed, chrome driver picked up chrome.exe under `Proguram Files` directory.

This is what I wanted to do.

## Was unable to disable a hiper-powered extension for PC Administration

1. According to chromedriver.log file, ChromeDriver generated a command like this:

2. --disable-extensions switch is significant. With this switch specified, Chrome browser tries to disable all extensions on startup.

3. I checked the list of extensions installed in the Chrome of my PC. I found an extension was installed by the Administratin team.

The extension was setup *unable to disable* for ordinary users. This is due to Corporate’s security policy.

4. I think that Chrome crashes because of conflicting instruction. --disable-extensions switch tells Chrome to disable all the extensions. But one of the installed extensions was resisting, therefore Chrome got unable to turn it off. Screenshot attached: 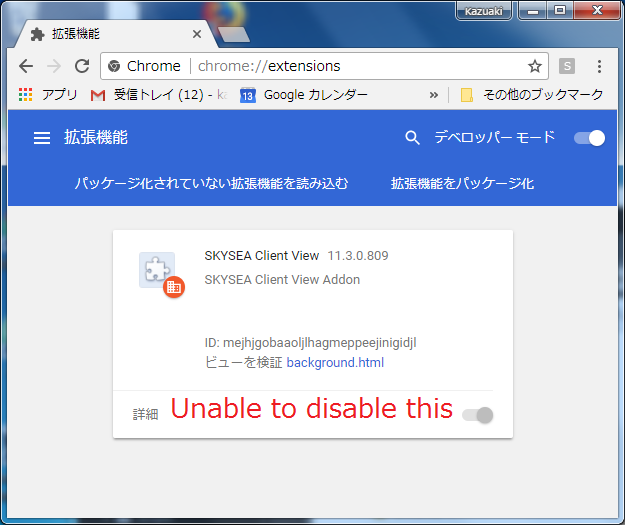 So that Chrome got crazy and crashed away.

I have no countermeasure with this conflict. I can not remove the extension. I can not change the behavior of chromedriver.

Hence I gave up using Chrome with Katalon Studio on my office PC. I am OK because I have understood the reason why Chrome crashes.

1 Like
I can not start Chrome from Katalon
Error "Element_id length is invalid" when trying to SetText with Chrome
Please remove unnecessary --disable-extensions --disable-extensions-except switches for chrome.exe
Getting chromedriver.log when you run Record/Spy Web to investigate why KS failed to start Chrome
Unknow error:Chrome failed to start (crash)
Does Katalon Studio support react.js applications
Chrome Driver, unable to navigate
kazurayam May 7, 2018, 7:20am #2

I am going to add info. I found an article in the Chrome’s official documents:

](Анекдоты про проституток)specifies a list of apps and extensions that are installed silently,
without user interaction, and which cannot be uninstalled nor
disabled by the user.

My PC is company’s property, it is administrated by the specialists. They installed a special extension into the Chrome as a ForceInstalledExtension. I cloud check it by looking at Windows Registry HKEY_LOCAL_MACHINE \ SOFTWARE \ Policies \ Google \ ExtensionInstallForcelist and ExtensionInstallWhitelist, such as this

The problem is that Katalon Studio can not disable the ForceInstalledExtension.

Chrome always crashes on my corporate’s PC. This incident has been my personal itch for the last 4 months. Finally I have managed to find a workaround, and succeeded to use Chrome with Katalon Studio on my corporate’s well-administrated PC.

The idea is as follows:

Following snippet shows how to:

I made a sample project here and exposed public:

@4280-kazurayam Thank you. I wanted to know about the path for chromdriver.exe? What should be this path in my machine. In another post of yours i saw path as "…/katalonVersion/configuraion/…’ . On my machine i dont have anything like that, can you please suggest?

In another post of yours i saw path as "…/katalonVersion/configuraion/…’ .

I was talking about the case on Windows.

Which OS are you working on? If Windows you would not say you dont find …/katalonVersion/configuration/…
Possiblely you are on Mac OSX. In my Mac OSX, I find the chromedriver binary at: