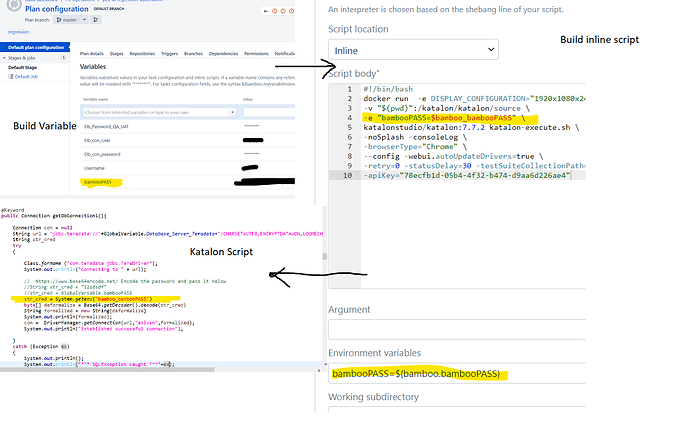 Above picture shows creation of bamboo variable and accessing inside katalon scripts. But im getting null value.

Could you provide a detail step to reproduce and how it will affect your work if not fixed?

you are referencing 2 diferent variables:

Hi Andrej,
I tried with that too. I’m getting same value as null. Do i need to change any name of the variable inside it or need to delete any steps in the script? bambooPASS is the variable name and it is not accessing value from the bamboo build

I’m trying to connect Data base. If it is not connected i cannot proceed with the further execution. My scenario is i’ve created a variable in bamboo and that variable is used inside katalon script.when i to run the build the script has to fetch the bamboo bauild variable value and execute it

Can anyone tell the exact steps to fetch the variable from bamboo. Do i need to specify anything in the profile or anywhere?

now i spot just another variable:
in bamboo you are setting bambooPASS
then in bamboo script in docker you are trying to use bamboo_PASS which not exist…
solution:

So how that password that are represented as ******* can be used inside the script? Diid i need to decrypt it or it is actually getting string value?

@sujithra.r you have few mistakes in your setup.

Diid i need to decrypt it or it is actually getting string value?

no, are masked only in the bamboo logs for security reasons but the values are properly passed if you use the right syntax.