I made a GitHub project 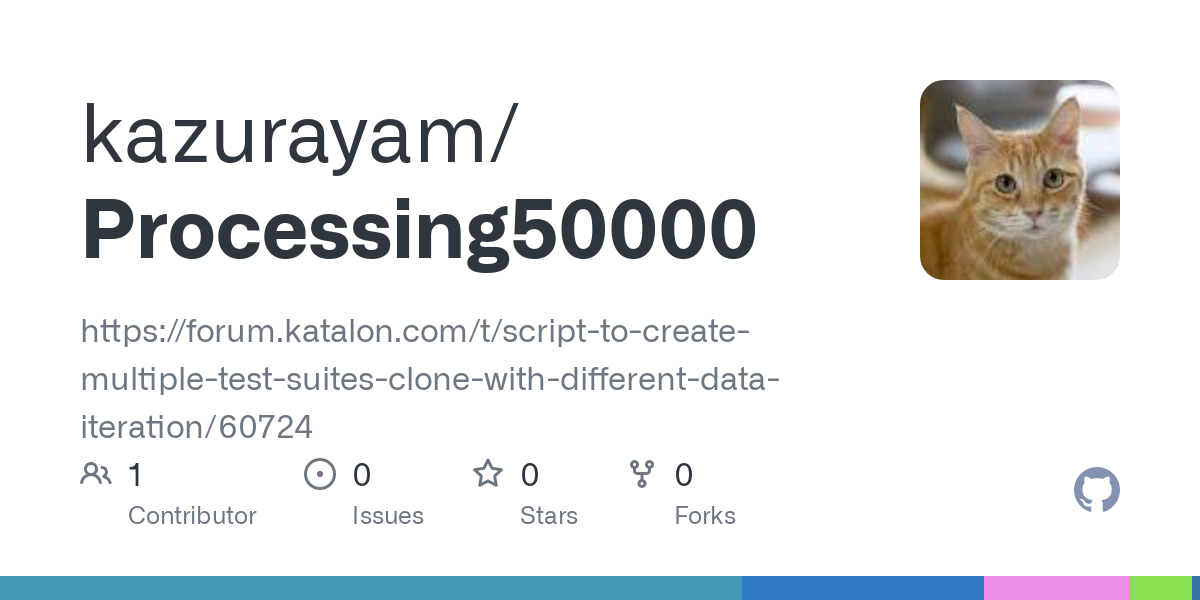 This project was developed in order to propose a solution to a question raised at the Katalon User Forum:app-name:

In Katalon Studio, I have a Test Case which requires some parameters runtime. And I have a CSV file of which lines contain the values to pass to the Test Case.

Let me assume an extreme case: the number of lines is massive: 50,000. If I run the Test Case for 50,000 times sequentially, who knows how long would it take? How many days and nights?

So, I want to somehow split the data into smaller chunks of N groups, and execute N tests in parallel in order to let the tasks to finish faster. N could be 2, 5, 10, 50, …​

I want the codes in the Katalon Studio project as simple and maintainable as possible.

I would start developing the project using Katalon Studio GUI on a laptop machine.

I would imagine distributing the whole task on multiple instances on Cloud with sufficient Katalon Runtime Engine licenses (50 AWS EC2 instances?) as much as the budget allows. With this hope in mind, I want to design the project’s code to run fine in such distributed environment as well as on a laptop.

I would not use Katalon’s Data-driven Testing feature, because I want to control the data-variable binding myself.

The input CSV file contains 50000 lines with some valuable data.

The following is the “actual test case”. I wrote it intensionally simple to make it easy to understand. You can implement whatever tests using WebUI.xxxxx keywords as you like here.

This test case expects 2 variables seq and data are supplied by the caller.

I want to split the data lines into smaller chunks, and apply each to the test case.

Description how the demo project is implemented

I made a Test Case TC_controller which reads the data.csv file in, determines which lines to process, calles TC_worker while passing parameters from the file into the worker.

Can you guess what start and end are? start and end decides which portion of lines in the data.csv file to be processed by this time of Controller execution.

If start=10 and end=13 are given, then the controller will call the the worker 4 times while passing the parameters like this:

I made Test Suites/TS , which just calls Test Cases/TC_controller.tc . No tricks here.

I made a Test Suite Collection TSC . The TSC invokes TS while specifying the name of Execution profiles to apply.

With KRE, you have a lot more flexibility to control the way how to split the data. You can dynamically generate the command line by any scripting technology you like (bash, python, etc)

If you deploy your test as distributed on AWS, as long as your budget allows, you can run 100 instances in parallel so that your test may finish far faster than a single laptop.

When I set GlobalVariable.DataStartsWithPattern='FF1' and run this test case, I saw in the console

TC_controller_filtering_data extracted 10 lines out of 50000, and called TC_worker just 10 times.

The point is that I do not use Katalon’s Data-driven testing feature. I do data-binding for myself; I can design and implement the rule how to filter the smaller chuck out of the mass.