Can anyone please share the snapshot of - how the project structure looks like while using Page Object Model in Katalon for API Automation project.

Is this what you want to see? 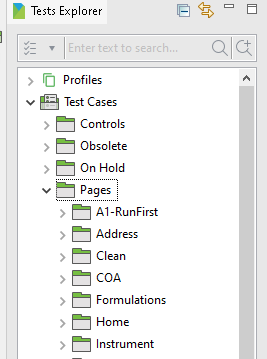 I understand the term “Page Object Model” as described in https://www.guru99.com/page-object-model-pom-page-factory-in-selenium-ultimate-guide.html

Can anyone please share the snapshot of - how the project structure looks like while using Page Object Model in Katalon for API Automation project.

I suppose nobody has ever created such project.

I am afraid, you are mislead by the document Katalon Docs/ Page Object Model.

I believe that the Katalon team has never officially stated that you can apply the Page Object Model into a Katalon Studio project.

Well, answer is that it will be a usual Java project, which could have many many variations The project structure depends which build system you use — Gradle, Eclipse, Ant. … I am afraid, this is not the answer you expected.

“API Automation” means that your tests will target JSON. Then you may want to use JMESPath to traverse the JSON content. If you are targetting SOAP XML, then javax.xml.xpath.XPath would be perfect.

But I have never seen someone has ever used the term “REST-Response Object Model”. I guess, this term is not necessary. Every single JSON document will be converted into a Java/Groovy object once, then you get access to it. All of them are “Object”. No need to invent a special term.

On the other hand, an HTML document is too complex to regard an “Object” with easy accessors. We need to write custom getter methods for data in a HTML document. So a special term “Page Object Model” was invented and accepted.

I have ever developed a Katalon Studio project for WebUI Automation (not REST API Automation) applying Page Object Model.

Here is a Test case that uses my “Page Objects”:

One of my “page object” is here for example

This “Page Object” has a line

Here I use org.openqa.selenium.By class to make a query for a tex “Flaskr” in the target HTML.

You can imagine, you want to use JMESPath instead of By. Then your “REST-Response Object Model” would be ready to verify JSON input.

By the way,
You would find that the structure of this project is unusual as a Katalon Studio project. The Test Case flaskr/TC3_Alice_and_Bob_interact is short; it uses no Test Object. It uses very little of WebUI.* keywords. There are many codes in the Include/scripts/groovy folder that implement methods to read data out of HTML and perform verifications. This project has such unusual structure because the “Page Object Model” does not fit in a Katalon Studio project very well.

You wrote you want to apply POM to your project. Then you must be a real programer. You would find it easier to apply POM in a usual Java/Groovy project with Selenium WebDriver & Apache HTTP Client on Gradle/Maven/Ant, than in Katalon Studio.

Finally, let me explain what is the very reason why I think Katalon Studio and POM does not fit. Katalon Studio does not help you to do unit-testing for the classes you wrote. If you are to use Page Object Model, then you will write many "class"es in Groovy or Java. If you are to write “classes”, you would need to write and execute JUnit tests intensively. Katalon Studio does not help you to do JUnit-based tests at all. Katalon Studio intentionally hides Eclipse’ JUnit support (once I tried to restore it by my custom keyword ). Why they did so? I guess that Katalon thought that it is better to hide the name “JUnit” from the users perspective in KS for simplicity. And they thought that all codes you write (or generated by the Recorder tool) in a KS project with Built-in Keywords & Test Objects will be easy to debug; you would not want unit-tests on your codes. This assumption is valid if you are a programming beginner who don’t know what the “class” keyword is. But a seasoned OOP programmer will find that it is difficult to develop a fair scale of class library in Katalon Studio. In short, you are not supposed to do any OOP in Katalon Studio.

In fact, I developed my “POM” class library for the sample project above in another Gradle-backed project. There I did enough JUnit-based testing. And once completed, I copied the Java source code of my POM into a Katalon Studio project to reuse it.