Hi Team, I am having an issue with Katalon today. I have been using the spy tool to record objects to my Object repository and have noticed that when I close Katalon and reopen Katalon, one of the objects I have captured just vanished from the Object repository section of Katalon. What’s even more odd is that if I navigate to the projects Object repository folder on my C drive, I can see the Object listed there ,but it is not present in Katalon itself. I have also noticed that when this happens and I go to use the spy tool to capture new objects Katalon acts like it is capturing Objects, but the Spy Tool does not populate with any captured Objects.

What version of Katalon Studio are you using ? Do you notice any condition that may cause this problem to surface ? Or it appears to be random ?

There are no other weird side effects I am seeing other than the following.
Unable to delete Objects in Repository
Object is listed in the file location but not in the Object Repository list within Katalon
Spy Tool every so often stops capturing objects that I highlight and press CTRL+~

I did some digging and found some people reference a corrupted rs. but the object in question couldn’t possibly be corrupt because I have also deleted the object myself and captured it a bunch of times, unless there is another underlining issue where the spy tool is causing objects to go corrupt upon capturing. I opened all Objects rs files and did not see anything out of the ordinary.

P.S. when is the new Katalon 7 being released? I read notes on it but haven’t seen an update.

Guys, have you guys encountered this problem before ?

Is the application you’re automating for a private web app ? I have never had this problem before, so it may be a little bit hard to debug. Can you send us the log under Help > Error Log, along with the screenshot (or preferably video) of the relevant artifacts.

Guys, have you guys encountered this problem before ?

To me, what Joseph sees is specific to his runtime environment. For example, Joseph installed KS in a directory where he does not have enough write-permission.

Are you working on Windows, Mac, or Linux?
In which folder did you install KS?

I have not seen this, but usually if there’s a disagreement between the Tests Explorer and the user’s file system, refreshing the project resolves the issue. This same kind of thing happens in eclipse all the time.

But as Brandon pointed out, refreshing folders in the Test Explorer usually resolves odd discrepancies like this. 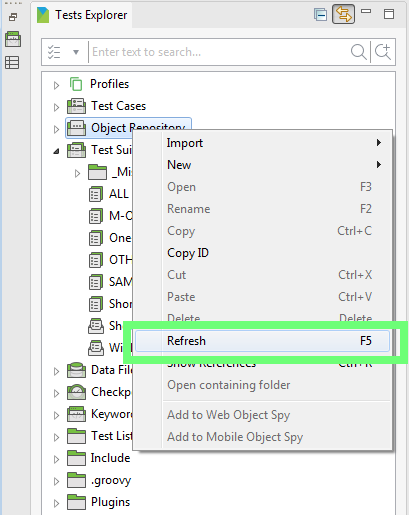 Hi Team,
Some how Katalon had become corrupted. Once I removed every single file that had to do with Katalon, and Reinstalled Katalon, My project started to work normal. Not sure how it became corrupted but it seems blowing it away and installing it again resolved the issue.

Some how Katalon had become corrupted

hope katalon did not jumped into politics …