Hi Everyone,
Our Company bought 3 Katalon Studio Licenses and 2 Runtime Engine Licenses but we faced some Problems while traying to Execute the tests through the CommandLine and Jenkins.
The current situation: 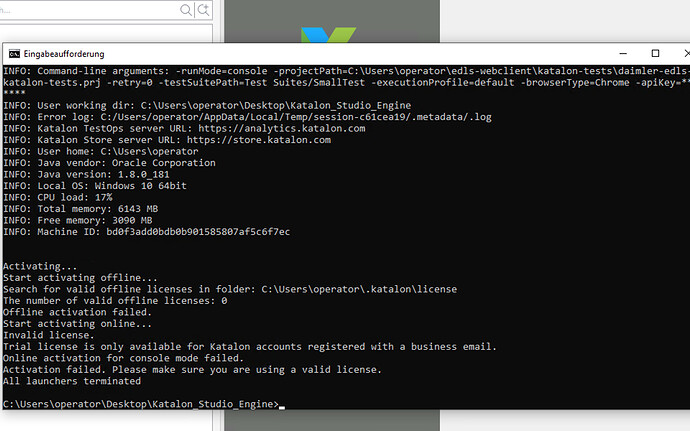 Thank you in advance for your help

Take a look at this file in a text editor:

Check for anything that doesn’t ring true. It is safe to delete this file – this will force KS to re-activate next time you start it up. I’m not sure if that affects KRE but it’s worth a shot.

Does your Jenkins machine trigger a build on Docker or Azure Devops ? Because that’s what KRE floating (officially DevOps) license is for. If you simply want to execute tests on a local Jenkins machine then what you need iis a node-locked license. The reason why you were able to run tests during trial is because we put no restrictions because we want you to experience Runtime Engine on different environments.

@Russ_Thomas
Thanks a lot for your help but i still get the same error.
@ThanhTo
Thank you for your answer.That explains why the Jenkins Job on dokcer works but this one doesn’t. When purchasing the licenses there was however, there was no mention of Restrictions, just that we could only have two machines using the licenses at the same time (which was logical). Do you have an idea who I should contact regarding this issue ?

You’re recommended to read this announcement regarding the consolidation of both Katalon Runtime Engine DevOps and Floating licenses into one licensing offering, Floating .