Katalon Studio is not capturing all the object properties with mobile spy.

It appears that we are unable to capture all the define object properties when using mobile spy while capturing objects on mobile app. Also looks like Katalon Studio is not able to see some objects at all. For example, we have widget class object that is extending some layout frame class. With Android Studios Layout Inspector we are able to see the object and all the properties for that object. But with Katalon Studio mobile spy we are only seeing the object for the layout frame class which was extended by the object we are actually wanting to capture.

Also is there a complete list of all the object properties Katalon Studio is able to capture for mobile objects?

Behind the scenes, Katalon Studio is using Appium to get the elements on the screen. Appium interfaces with XUITest (for iOS) and UIAutomator (for Android) to get that information. It’s probably not going to be the same as what you see in the Android Studio Layout Inspector because of things Android is doing to show elements on the screen and Appium is doing to get information about those elements; I have seen some elements become nested deeper than I expected or some to remove the nesting - there isn’t really a rule for how elements will be structured when inspecting.

For this reason, it’s a good idea to give resource-ids to elements you want to work with when testing instead of relying on an element hierarchy to find them.

As for the available properties, it’s going to vary depending on the element class/type. Most Android elements will have a class, resource-id, instance, package, text, x, y, width, height, and enabled.

Hello,
In my scenario, I want index attribute but still it is not capturing that attribute in that Object. Why?

When you say that it’s not capturing that attribute, do you mean when you use Mobile Spy? Could you please share a screenshot of the screen you’re trying to capture the element for? Can you also please share the object properties that are captured for the object you want?

I am also facing same issue.
On one of my app page when I click Capture objects, the is nothing shown under ALL OBJECTS
I have tried with different versions of appium and that didn’t help.!
I found this issue in iOS app. And the page which I am having trouble is having a sliding selector as shown. 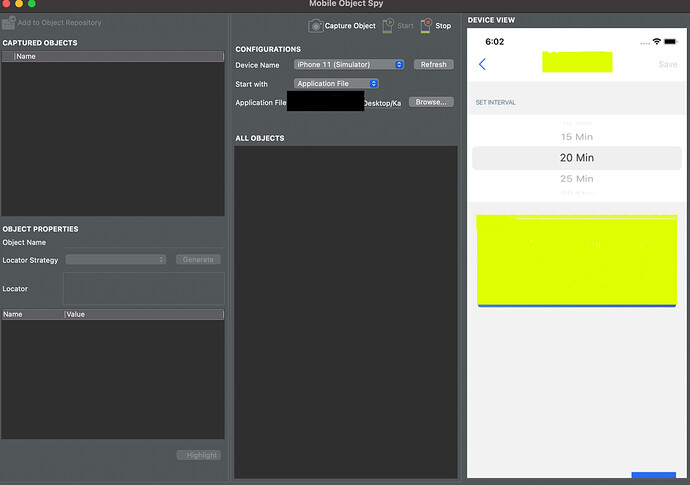