I am trying to run scheduled jobs using Bamboo, however running into a few technical issues.

Issue 1)
The suite does not appear to run, and gets into an ‘endless loop’

From logs ,script correctly
import and build the source.
2 gradle tasks, which appear to succeed.

And then continually repeats

Anyone have any ideas as to why this is failing to run the suite and why I get the unable to resolve class?

Do I need to be concerned on the Command Line creator about the following bolded?

ie do I require to do anything?

Could you run this test project by command line alone not in bamboo?

Should have mentioned when I run this on my local windows machine the command line kicks off and runs the test and I can see the logs being generated in console and results appear in the Katalon Studio suite reports.

On the server I see the splash appear but no logging to console, however the result are in Katalon Suite reports. I will check to see if any more details here.

I only have the -consoleLog-=noExit and the -runMode=console on the command line for debugging, dont use these parameters in the CI. As read not to use in forum or documentation.

Can you ouput or is there a directory that I can review the console log output?

I now have the katalon analytics running. (Mistakenly comitted this to master switched off).

I now have the issue on the server or locally if I run from the Katalon Studio the test suite is succeeds. If I run from CMD line it fails miserably.

It appears to have issues generating global variables at command line execution.

I have seen others mentions about this. I will check the forums.

Getting a Groovy:unable to reslove class (then several broken classes). I dont get this on running via Katalon eclispe IDE, there is also no problems in Katalon eclipse IDE. 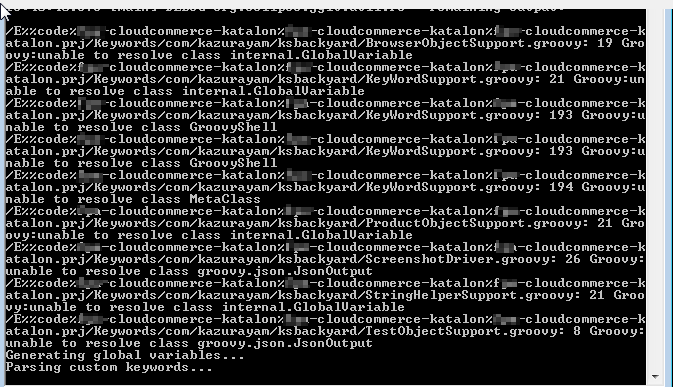 Appears to be due to class resolve issues.

I have removed all the offending unable to resolve class issues. This was explained in another forum.katalon.com thread.

I still cannot get the browser to ‘kick off’ in command line.

If I run the exact same test in Katalon studion it passes.

The browser does not appear.

I note in the logs 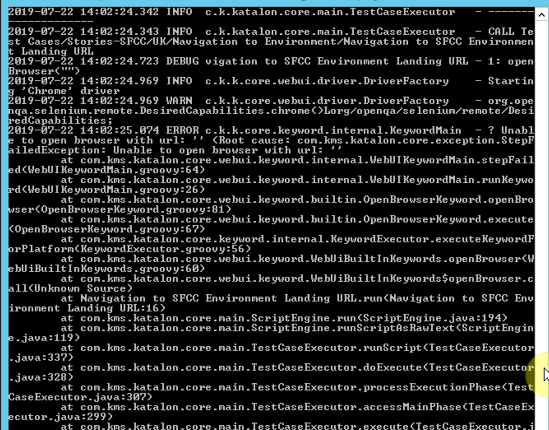 Which is odd as this works from running in IDE.

Any ideas much appreciated.

Could you please try appending --config -webui.autoUpdateDrivers=true to the command?

Guide on how to update WebDriver automatically.

I had tried that also, however still no joy. Tried again no joy.

This is both on a win7 machine and a winS2012. I could expect the win7 to throw wobblies being an enterprise locked down machine with IS protocols and hardening, but the winS2012 64bit is vanila turnkey.

I will try reinstalling from a clean pc and building a simple project.

I am wondering if there is a regression issue between earlier projects?
I set up a clean Katalon, on clean build machine.
Downloaded one of the github datadriven examples.
With the command line - I got the same issue.
However I then went and created a new simple hello world to google site project example this functioned correctly using command line.