I have seen a number of posts here asking for the ability to share test cases, scripts, object repo etc between projects and of course the usual answer is “use version control”.

Of course that is possible and in some cases, it is probably the right thing to do. But for me, it is not - let me explain…

I have a Katalon Studio project which I am using for a pilot project in our new automation effort (as the current automation is a failing mess).

I have a bunch of smoke tests created that make use of many ‘shared’ test cases that perform the bulk of common tasks within these tests, and they all work well. All good so far.

As of this morning, I have created and executed some acceptance tests that are written using the BDD feature of Katalon, and these BDD tests work by calling some of the existing test cases from the step definition files. These also work well. Great

Now, my issue here is, my Katalon Studio project is integrated to a TestOps project that is not setup for BDD (because I was not using BDD until this morning).

I understand that if I want my BDD Tests to take advantage of the TestOps reporting and analytics, I need to create a new TestOps project and mark it as using BDD.

Whilst I am mostly, for the moment, executing my tests manually, I can just switch the TestOps project when I need to, but as soon as I get this setup with CI, that options goes out of the window.

Feature Request
So, what I think would be a good feature, would be to allow us at the Test Suite Collection level, to override the project level TestOps configuration and say, I want to use the TestOps BDD project when my BDD test suite collection has completed and is uploaded the output etc. The option to do this should also be made available from the command line for use from CI.

That way, I can continue to use a single Katalon project and use different TestOps projects depending on what type of tests I am executing, normal or BDD. I do not think it should be necessary to have to create a new Katalon project and try to use git to pull existing test cases and object repo, just because I want to execute some tests that are BDD.

Please give some consideration to the above request as I think this could be very useful for a lot of users.

Beyond my experience in TestOps but certainly sounds fair.

This feature was introduced in v7.8.0. Please upgrade to the latest version.

Here’s how to override TestOps project ID via CLI.

By default, my Studio project is integrated with this project: 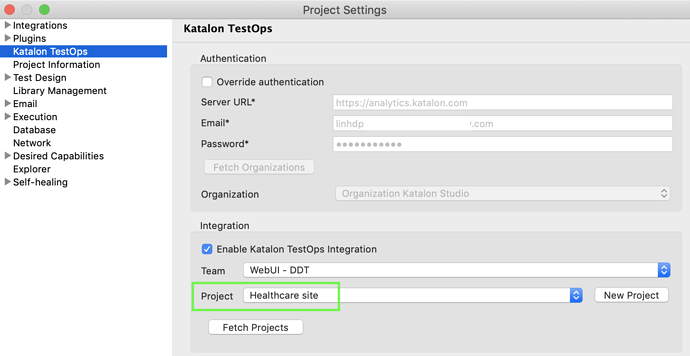 When generating command for a Test Suite or Test Suite Collection, I select another TestOps project to submit execution results. 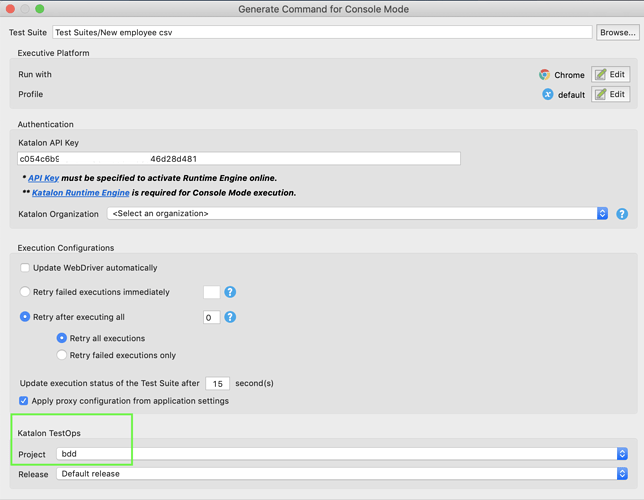 Hope this is what you need

@Jass - Yep, that sounds like what I said above. Silly me!

Thanks for the reply. I look forward to trying it out if I ever convince the management to buy my licences!