Hi folks, Does anyone have any insight as to how to Decode a ‘URL’ from an email file with Katalon.

Setup:
I have a test email file where the URL ‘https://www.google.com’ has been encoded to base64:
aHR0cHM6Ly93d3cuZ29vZ2xlLmNvbQ==

I found Base64 (Katalon Studio API Specification)
But I am not sure how to implement it with Katalon.

Hello world, what is my URL?
aHR0cHM6Ly93d3cuZ29vZ2xlLmNvbQ==

Before talking about base64, your test case should be able to do the following:

Please make a test case that does this; and show your code.

Provided that you could make it, we would be able start discussing how to use the com.kms.katalon.core.util.internal.Base64 class.

Thanks @kazurayam, good plan!
I will post back here when done.

Hi @kazurayam ,
I have created the following test case and am seeing the expected value for “GlobalVariable.DecodedUrl”

Output after code is run: 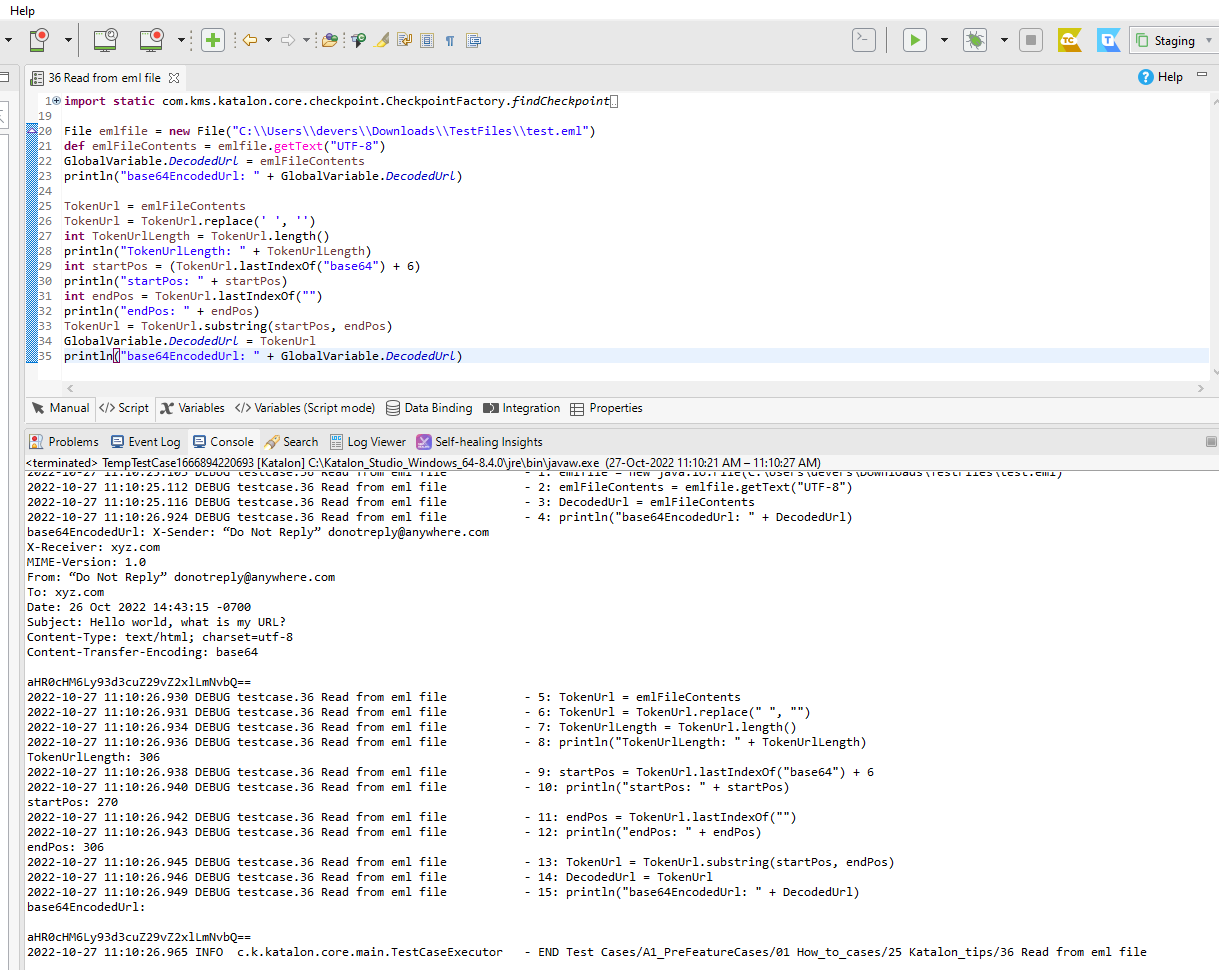 Hi @kazurayam,
I also have this question…

My question is how do I open say the first *.eml file in the list with Katalon?

Your 1st question was how to use a Katalon’s builtin class to decode a string which has value encoded by Base64. The following shows how to do it.

OMG, very cool!
Thanks @kazurayam it works like a charm!

Your second question was how to open the 1st file *.eml file in a folder.
The following code shows how to:

This gave me, for example:

Here I used the following techniques:

Hi @kazurayam,
Thanks so much for this, I will give this a try and post back here so that others can learn from your excellent direction.

Hi @kazurayam,
Sorry to bother you yet again, but I am seeing Illegal base64 character d’ error messages when trying to decode my captured Base64 encoded data. If you have time could you please take a look?

If you have time could you please take a look?

No, it is too messy for me to understand, sorry.

And I think you shouldn’t do that. I will explain why as follows.

You should start with studying the specification of Email message format.

Here the doc mentions CRLF (0x0D 0x0A in hex) should be used as line separator in Email messages on the fly.

In the networking domain, a “new line” must be represented by a fixed byte sequence (0x0D 0x0A). Protocol defines it regardless which type of OS/application is generating/consuming messages across network. The RFC-2822 requires CR LF.

However, a “new line” in files is OS-dependent due to a historical reason. Here is a pitfall.

Mac wants a new line to be a single LF (0x0A). Therefore any text editors on Mac translate 0x0D 0x0A into 0x0a.

Linux want the same as Mac.

Also, Git has an optional feature that, on Windows, it translates all CR LF (new line in Windows style) in files into LF (Unix style) when you commit changes into git repository.

I found an interesting article about the history of CR+LF vs LF:

There is a twist in Java also. The following code:

This line writes a 0x0A on Mac, but it will (though I haven’t tested it) writes “0x0D 0x0A” on Windows. Java checks the type of OS where it is currently working on, and switches the binary representation of “\n”.

If you save a new line in Email message into a file, it will have either of 0x0D 0x0A or 0x0A depending on which OS, on with which application you saved the message into the file. Therefore the content of the file may not be valid as a Email message as RFC-2822 specifies.

You shouldn’t make *.eml files at all.

You should not serialzie raw bytes of an Email message into a local file to consume later.

You should not try to create/edit Email messages as file using text editors.

If your application takes this way, you will get a message body:

because the library that you use will do Base64 decoding behind the scene.

Therefore, your original question “How do I decode a base64 encoded string from an email using Katalon” is pointless.

Hi @kazurayam,
I made a few changes to your code so I could load the files from our Network drive.
Which works fine… The issue I am facing is that 400th record is being picked not the 1st record.
When I load the folder from Windows it’s sorted by date. I am guessing this is the issue?
Is there any way to tell Katalon to sort the folder on date? Or do you think something else is going on?
There are 955 records in the folder right now which continues to grow daily.

Note: I am not trying to decode any data as you pointed out this should not be done…
I have another use case for opening saved eml files to validate contents.

@kazurayam,
Thanks for highlighting the risks of working with files.

Is there any way to tell Katalon to sort the folder on date?

Katalon has nothing to do with this problem: sorting it.
Your Groovy code is totally responsible for it.

Please specify in more detail how you want to sort the List<Path> emlFiles.

Thanks for your quick reply.

I have made a GitHub project This project was developed to propose a solution that was raised by Dave Evers in the Katalon Community forum at How do I decode a base64 encoded URL from a test email using Katalon - #19 by Dave_Evers Problem to solve One day in the “Katalon Community” forum I was asked a question. The original poster asked as follows: He has several hundreds of text files in a directory. Every file was named with a postfix “.eml”, which stands for “Email message”, like 79e…

for my proposal to your problem.

Hi @kazurayam thank you for all your hard work and time you spent on developing a solution for my file filtering request, hopefully it will benefits others looking to do something similar.

I did the following in my Katalon project:

I however ran into a ‘java.lang.StringIndexOutOfBoundsException: String index out of range: -1’ error when I added an 8th file which contained a base64 encoded Subject. The error was caused by the base64 Subject: VGVzdCBTdWJqZWN0 (once I removed ‘VGVzdCBTdWJqZWN0’ the test case ran with no errors). After seeing this error I realized that I should have asked to have the files sorted based on their last modified date-time rather than depending on the file contents (sorry about this kazurayam). This way the file contents would not have to be checked thus avoiding content errors.

Already done. Use PathComparableByFileLastModified class, which is included in the same jar.

How would I read in the contents of first file that is returned by the filtering?