Why is KSE changing scripts and how to avoid it?

Recently, we’ve been seeing another “feature” of KSE. It’s changing scripts by itself at the arbitrary time just because it “thinks” that // should not be in the beginning of lines but it should be indented. As a result, we are having the following problems:

Another problem is that the files are shown as modified even though there was now intentional modifications but we still need to double-ckeck it before comitting.

Who came up with such a beatiful feature? Anyhow. Thanks a lot for that useful “feature” and now can you please let us know how to get rid of it? Thanks again!

@gdearest07 Do you ever switch to Manual view then back to Script view? When Katalon chooses to reformat a script, it’s usually due to that – a well documented bug.

@duyluong I thought you guys had promised a fix for this annoyance. Has it been addressed yet?

Thanks, @Russ_Thomas, yes, I did. To be precise, sometimes I click on Manual view by mistake (I don’t use it) and then switch back to Script view. Subjectively, it looks like it can happen to any file opened in KSE regardless of switching. I’m going to pay more attention to switching.

Actually, I’ve just noticed that any test gets openned in Manual view after clicking on it.

Actually, I’ve just noticed that any test gets openned in Manual view after clicking on it. 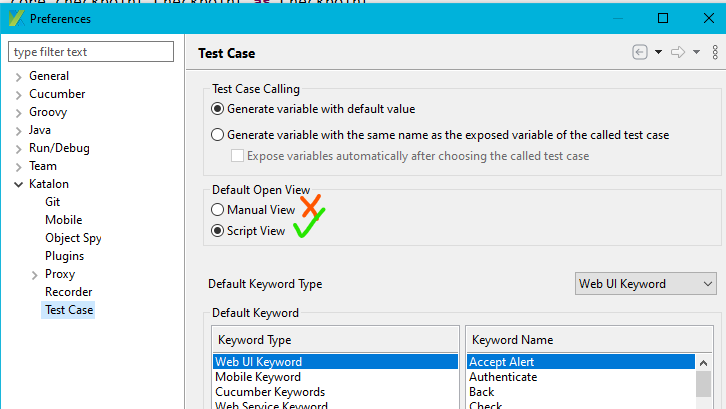 Have you upgraded Katalon Studio recently?

When you upgrade Katalon Studio to a new version, this option will be initialised to “Manual View”. Even if you had this option to be “Script View” in your previous installation, it won’t be carried over while upgrading.

After upgrading Katalon Studio, I always change this option to “Script View”. This is the 1st thing I do after upgrading.

Hi @gdearest07,
As I understand, the incident in step 4 happens when you switch to “Manual Mode” by accident, right?
Or how do you do the modifications exactly?

Excuse me because I do not follow this problem closely,
Could you please send me some references about the switching problem and responses from duyluong?

some references about the switching problem

Why do comments always move back to left? API / Web Services Testing

Hi, Is there a reason why the comments always go back and align with the case statement? I have tabbed the comments to align with my code but next time I open the file they are aligned with the case statement again. (I don’t know how to tab in this post but the two lines after the comment are 5 spaces to the right and I want comments to be 5 spaces to the right also.). Thanks case “InactiveUser”: // Check to make sure you get “User is inactive” message back. String textrep = WS.getEleme…

Excuse me because I do not follow this problem closely,
Could you please send me some references about the switching problem and responses from duyluong? 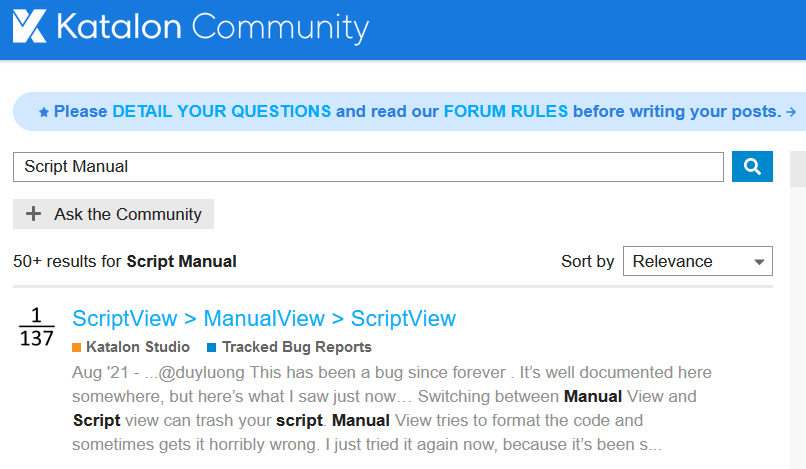 That topic is assigned:

Yeah, this is a pretty serious bug, and I think there have been other reports of it floating around, where people mysteriously lose data without any apparent cause. It’s good you were able to find a reproduceable scenario for it. I’ve always suspected that Katalon generates scripts using reflection, and that’s why, for each script you write, Katalon generates a “.tc” file as well as a “Script0123456789.groovy” file. Not sure if that’s actually what’s happening behind the scenes, just a guess, b…

How to disable editor script to auto formatting Feature Requests

Hii there, Mostly i do scripting in Katalon, and I feel auto formatting source code in script mode is not convenient, sometimes it automatically add new line at keyword call, the println “something” became println(“something”), i prefer less parentheses (groovy goodness), and sometimes i got my method parameters argument is empty, this unexpected behavior makes my script very fragile Is there any way in Katalon preference to disable auto formatting in script like this? I’m hardy find the set…

Disable autoformat when switching mode or save test case

https://forum.katalon.com/t/how-to-disable-editor-script-to-auto-formatting/8920… For people who use script mode intensively, they may have their own preferences. We should not enforce auto-format unnecessarily.

How to disable editor script to auto formatting Feature Requests

Annoyances are one thing, but this now regularly breaking my code and I’ve already set the script window as the default. I’m doing soap web service test cases and traversing the xml using find with closures, similar to: String code = parsed.depthFirst().find{it.@name == 'UNIQUE_NAME'}.text() Pretty straight forward. I don’t ever use the manual window with these. But I do routinely add web service objects via the Plus Icon and “Add to existing test case”. Then, when its added and I’m transfe…

When I go from script mode to manual mode and back, the editor and blank lines in between every statement. This makes the code hard to read. There are some lines of code that I want grouped together with no blank lines in between. I have not found a setting that stops the tool from doing this. The code runs without the blank lines so why are they inserted. I also found that it decides to randomly delete commented out code and delete classes that I created to perform functions like lazy loading…

Why is KSE changing scripts and how to avoid it? Bugs Report

Hi @gdearest07, As I understand, the incident in step 4 happens when you switch to “Manual Mode” by accident, right? Or how do you do the modifications exactly? Regards, Nam Nguyen.

I didn’t notice when exactly it was hapenning. Just saw the “results”. Howerver, I’m not sure that it’s related to switching to “Manual Mode” (as it was noticed by @Russ_Thomas ) only. I’ve seen the same “results” in Keywords, which have no “Manual Mode”:

By the way, despite the differences (produced by KSE, please see an example above), those differences are not highlighted at all in KSE and not detected by using “Next Difference”, ''Previous Difference". Is this expected? Thanks.

Thanks for your information,
We’re working on the issue of reformatting the code.

However, it’d be much better if you helps us to seek the trigger of the issue so we could investigate it further.

I’ve seen the same “results” in Keywords , which have no “Manual Mode”:

The simplest trigger is just OPENING any KEYWORD file that had // at the very beginning of the line. That’s it. Nothing else is needed to totally screw up the file and the collaboration between our team members who are using KSE.

ust OPENING any KEYWORD file that had // at the very beginning of the line.

I could confirm what you told us. 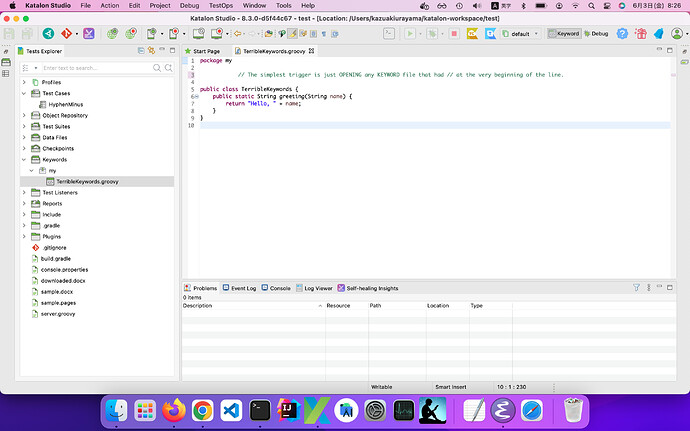 After opening a keyword source: 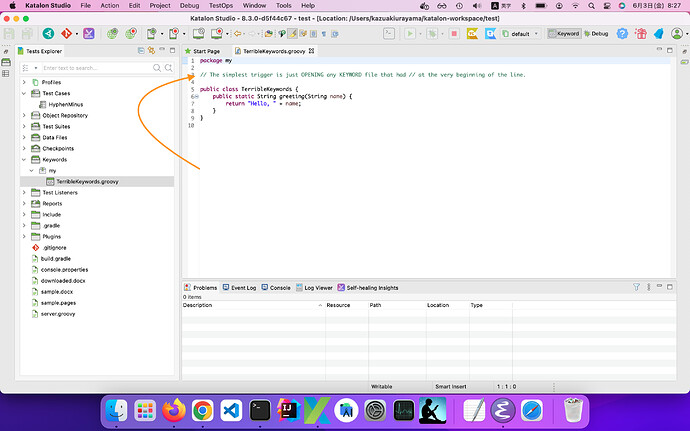 I could see the white spaces before // is erased.

Thank you, @kazurayam. Though, in my case, it’s the other way around. The // at the beginning of a line gets shifted to the right (KSE works in mysterious ways))

In the tool bar of Katalon Studio, choose

As “Active profile” you would have “Eclipse [buit-in]”. Click Edit... button, then you will see the following dialogue: 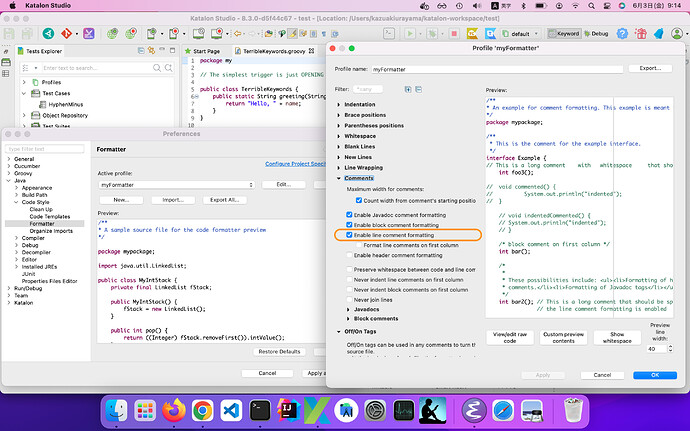 In the dialog, you can find an option “Enable line comment formatting” option.

Try turn it on/off. You will see the indentation of line with // appears and disappears.

What you saw was the Code Formatting feature built-in Eclipse. You can chose whatever setting you like.

Also you can turn the code formatting on/off in the code.
How to? See

Please search in Goodle for further how to.

@gdearest07’s issue is about code formatting performed by Eclipse platform. This is not about the original problem in Test Case scripts being reformatted by Katalon Studio. Another issue.

Thanks again, @kazurayam. OUR original problem IS that it didn’t happen before and then it started all of a sudden. So, obviuosly, something was changed in KSE, not on our side cause none of us changed anything (none of us has any idea what should be changed in those settings). Also, by @nam.nguyen’s request I provided the SIMPLEST triger that’s easy to reproduce.It’s quite possible that there are some other triggers.