[TIP] How to help reduce memory consumption in Katalon Studio v6.3.0 and above

Starting in v6.3.0 and the later version, Katalon team will carefully focus on Katalon Studio UI, UX and performance. Especially in v6.3.0, Katalon Studio has improved the issue when working with multiple variables in Test Case, Global Variable. If your project has many variables to work with, Katalon Studio v6.3.x is the version you need.

We tested on a Windows 10 PC, worked on our JIRA sample project for an hour with multiple test cases, open some larges test data, run sequential many test suites and test suite collections and observe the memory of Katalon Studio. 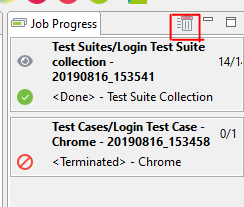 This topic may help you work better with Katalon Studio but this is not that all. Katalon team is still working and spending our effort to bring many improvements to Katalon Studio via our coming releases.
If you are interesting with this topic, we recommend you share your heap dump profile, some screenshots of Katalon Studio memory consumptions, we will investigate your cases.

14 Likes
Katalon Parallel execution
HTML reports taking hours to generate because Katalon takes automatic screenshots
With every new Katalon update, browser launch seems to take longer
Any way to reduce memory consumption in Katalon docker?
Having issue while opening a web url in any browser
Slowness Running Script
Unable to generate report
Is there an automatic option for cleaning up cache in KS 6.3.3 or KS 7
duyluong pinned globally August 16, 2019, 9:15am #2
Custom Keyword java.lang.ClassNotFoundException
jai8.jacob August 19, 2019, 1:02am #3

@duyluong Thanks for sharing the tips! I will be trying them out and check if there are any significant changes to the occasional not-very-smooth UI, UX performance from Katalon. Happy to know you all are working to bring many improvements to KStudio.

I am keen on understanding how can one “share heap dump profile”. As of today, I know of only one method which is using jmap. It is as follows,

To capture a heap dump using jmap we need to use the dump option:
jmap -dump:[live],format=b,file=<file-path> <pid>
Note: for users not aware of jmap - it is a tool to print statistics about the memory in a running JVM.

Thank you for your time. Cheers.

That’s the heap status after katalon was left idle for two days. Previous releases would have been showing ~18nn/2048 after that kind of time period.

Keep up the good work and thank you!

To whom it may concern,

Please first check out the release note and click here to download if you want to try version 7.0.0 (beta) in advance.