TestSuite not excuted because of an Empty table

is there an a way to stop katalon from considering an empty database table as unavailable ?
the table will get filled with data during the test suite ( so when the data is really needed it will be there )

Currently the Test Data must be available before the execution. Can you elaborate more on your test scenario, and can you do it any other way ?

I’m doing api tests , i start with an empty database .
i have datafiles (csvs ) with the testdata 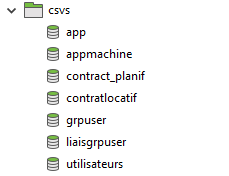 I have 3 testsuites in the test collection :

Testsuite No1 calls a testcase that inserts data into the database

image778×185 9.53 KB
the test case uses a custom keyword that does a simple INSERT query on the tables that will be used in the next step

Testsuite No2 is where i do the real tests , it is bound to multiple datafiles , some of them are internal data and some are database datafiles .

image1020×312 21.1 KB
this is where katalon really needs the data not in the step before ,
but because it checks in the beginning of the testsuite collection (not for each testsuite) it dosen’t work

I expect katalon to throw the unavailable error when you run the testsuite directly , but only show a warning if you run it in a testsuitecollection ,i expect there to be an option to chose between throwing an error or a warning in the test suite collection .