Is there a project setting that will terminate the Chrome driver even after the script execution does not complete? I’ve got a ton of ChromeDriver executables sitting in processes, I’m sure there is some easy way to kill them but I’ve not quite figured out. 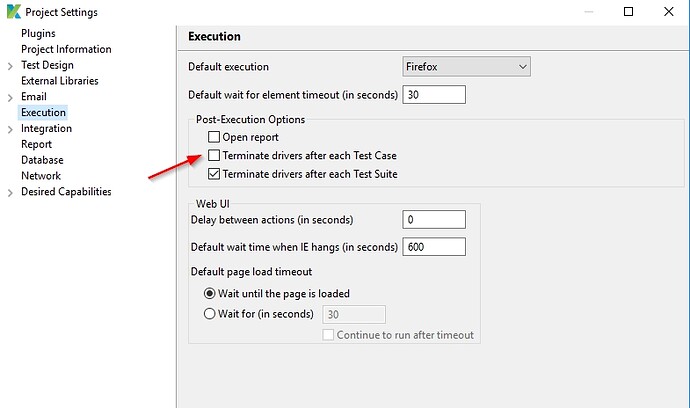 A-HA! I was looking in Katalon Studio Preferences. Thank you!!!

You can also do this yourself en-mass. See this post:

This is almost always caused by drivers still running from a previous test run (this is a normal thing that always happens with webdriver). You can reboot, then delete the studio folder and the project folder, or easier still, run the following command from the command line, depending on which browser’s you’ve executed things in: Chrome: taskkill -F -IM chromedriver.exe Firefox taskkill -F -IM geckodriver.exe Edge taskkill -F -IM MicrosoftWebDriver.exe IE taskkill -F -IM IEDriver…

Just an FYI that if you change that project setting that Marek has highlighted, you won’t be able to use some features, most notably the “Run from here” feature.

I sometimes have to kill Katalon and my web browsers as well, so I created a Windows batch file with the following contents:

I have question regarding same topic. How do we set not to Terminate driver ONLY if the test case fails? So, terminate when test case pass but DO NOT if test case fails…