I have made a GitHub project to share my findings. I made it publicly accessible. 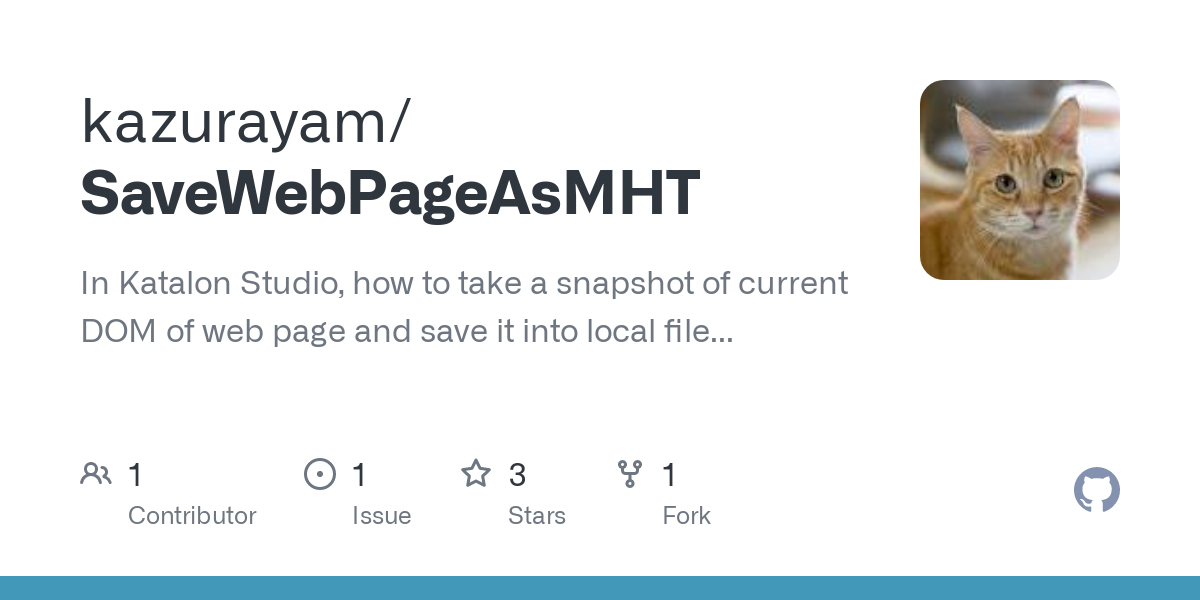 GitHub - kazurayam/SaveWebPageAsMHT: In Katalon Studio, how to take a...

I want to automate the following tasks by scripts in Katalon Studio:

Description of the demos

Save web page as MHTML

In October 2020 in a post in the Katalon Forum, Katalon 7.8 beta was announced where included a new Feater called Time Capsule .

ThanTo, Katalon Developer, added a description about this feature.

Time Capsule captures the MHTML of the page when a test fails.

MHTML? What is it? Quoting from Wikipedia:

MHTML, an initialism of MIME encapsulation of aggregate HTML documents, is a web page archive format used to combine, in a single computer file, the HTML code and its companion resources (such as images, Flash animations, Java applets, and audio and video files) that are represented by external hyperlinks in the web page’s HTML code. The content of an MHTML file is encoded using the same techniques that were first developed for HTML email messages, using the MIME content type multipart/related.[1] MHTML files use a .mhtml or .mht filename extension.

OK. Now I understand what MHTML is.

Inspired by the Time Capsule, I got a new requirement to myself. I want a Custom Keyword which enables me to save snapshot of web page opened in browser into a single file in MHTML format . I want to use the keyword as often as I like during WebUI testing in Katalon Studio. For what? — For my VisualTestingInKatalonStudio project. The current version of this project takes web page screenshots in raster images of PNG format. I thought that MHTML might be better than PNG for recording the web page. Especially when I want to do Visual Testing for multiple viewPortSizes, the MHTML would be useful.

I had another motivation. In another disucusion in the Katalon Forum I was informed of a commercial product Percy, Visual Testing as a service. Percy does visual page comparison, but they wrote “it is not designed to accept screenshots, but instead captures DOM snapshots and page assets (CSS, images, etc.)”. — How they do that? In October 2020 I had no idea. But now in November I have got a guess — Percy possibly utilizes MHTML.

So I have studied how to save pages in MHTML within Katalon Studio. I have learned some points that might be interesting for Katalon users. I have developed a demo project, and here I share it.

I happend to find the following thread in the Puppeteer issues.

This suggests that Chrome DevTools Protocol (also known as CDP ) supports Page.captureSnapshot method, which turns the current DOM of web page into a String as MHTML.

This looked exactly what I want to do! I realised that my question was how to make use of Page.captureSnapshot method of CDP in Katalon Studio.

The Chrome DevTools Protocol allows for tools to instrument, inspect, debug and profile Chromium, Chrome and other Blink-based browsers. Many existing projects currently use the protocol. The Chrome DevTools uses this protocol and the team maintains its API.

Instrumentation is divided into a number of domains (DOM, Debugger, Network etc.). Each domain defines a number of commands it supports and events it generates. Both commands and events are serialized JSON objects of a fixed structure.

How can I make use of CDP in Katalon Studio? In Nov 2019, Katalon LLC released a Katalon Plugin Chrome DevTools Protocol Integration. In its README, it writes:

This plugin bundles the jar of Chrome DevTools Java Client and make it available to Katalon projects.

And this plugin provides a class com.katalon.cdp.CdpUtils which implements a factory method that creates an instance of com.github.kklisure.cdt.services.ChromeDevToolsSerivce from com.kms.katalon.core.webui.dirver.DriverFactory . Provided with this utility, we can use CDP Java Client API together with Katalon’s WebUI API.

What is Chrome DevTools Java Client? Quoting from its README:

Chrome DevTools Java Client is a DevTools client - in Java.

2 Likes
ERROR c.g.k.c.s.impl.WebSocketServiceImpl - Web socket connection closed due to BufferOverflow raised by Tyrus client. [It might be realated to @SetUp, @TearDown in Katalon]
Console use katalon test cases
Unable to use iFrame parent to differentiate between identical objects in the page
Community Building
Community Building
Visual Testing (image comparison) with Katalon Studio 7.8.0 and Katalon TestOps
Hey, Katalon 7.8.0 official release is out with new cool features. It's cooler to have your feedback!
Russ_Thomas November 19, 2020, 2:05pm #2

This is great work, I’ll look into it to see if there’s something we can adapt to Katalon.

10 months have passed since I published this custom keyword. How much this feature (take MHTML of web pages) is helpful for resolving problems? Let me look back.

The primary question is: who makes a MHTML, and who reads the MHTML.

I wanted people to take MHTML of their webpages and attached it to the post for questions in this forum. I thought the MHTML would make it possible for me to reproduce their problem on my side easily. The following is an example where I requested the questioner to post a MHTML :

But in fact, the exchanged MHTML file did not help. I could not reproduce his/her problem on my side.

I guess, the javascript in the page is AJAX-driven, requires a live continuous connection to the backend server, so that the page frozen in a MHTML does not act properly.

Once MHTML looked hopeful for me. But now I find it useless.

By the way, I personally do not need MHTML to resolve problems that occur in my local project. I have all the resources (HTML/CSS/JS, Test scripts, logs) on my PC. Why do I need an archive of them = MHTML? — No, I don’t.

I know, Katalon Studio v8.0.5 changed its “Time Capsule” implementation so that it takes MHTML instead of screenshot images. To me, this change looks nonsense. “Time Capsule” creates MHTML files for the tester assuming that he/she would find them useful. — Well, I would disagree with this assumption.