Project broken when transfering from MacOS to Windows

My Katalon Studio project cannot be opened in Windows once it has been modified on MacOS.
See the image below: 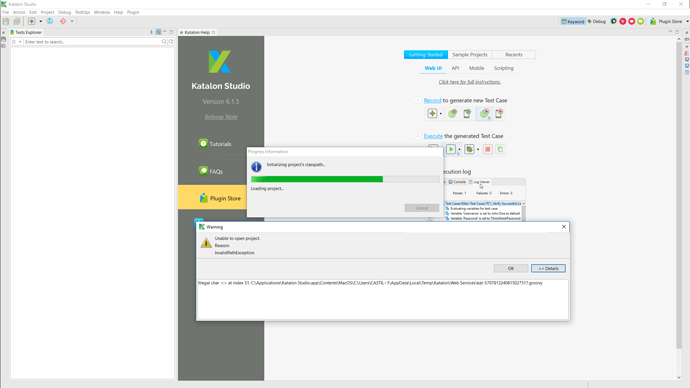 (It seems that Katalon Studio tries to modify a file path coming from MacOS to a Windows file path, doing the modification incorrectly).

Temporary workaround:
The problem is the .project file, in the project directory root: it contains an invalid path:


So, the workaround is to overwrite this file with its previous Windows version.

Similar issue with same root cause: Transfer project from Windows to Mac

i am not a mac user, but i saw on my wife’s machines (she wont let me touch them 'coz i tend to linuxize them) that mac stuff do create some voodoo hidden files in all places.
carefully check the .whatever files and set gitignore acordingly

Hi Ibus, I think that’s not the problem: as I reported, the cause of the bug is that Windows tries to convert a MacOS file path (/Applications/Katalon Studio.app/Contents/MacOS/…) to a Windows path (C:/Applications/Katalon Studio.app/Contents/MacOS/C::/Users/CASTIL~1/AppData/Local/…), so that conversion results in an invalid file path.

That’s why the workaround to fix it.

You wrote “the cause of the bug is that Windows tries to convert a MacOS file path to a Windows path”.

I disagree with your view.

“create a zip -> copy it across machines -> unzip it” — by doing this way, you will encounter a lot more troubles. For example, the .classpath file will most probably annoy you next. The bin/ folder transported from other machine will make your Katalon Studio crazy.

I suppose that you are not using Git. I believe you should use Git to share “source files only” across machines excluding machine-dependent files which are generated by Katalon Studio for each individual runtime environment.

What Git is for? Have a look at the following description

In the Katalon Forum I have found several posts asking how to share artifacts developed in a Katalon Studio project with others. Drunda Nibel wants automated code sharing how to create jar libraries from custom keywords Sharing test cases or keywords to multiple projects Sharing methods between tests Is it possible to share test case between different projects? sharing of test cases Is there any way to share test listeners and custom keywords code to multiple projects? I suppose that many of …

In the <projectDir>/.gitignore file you want to write

then the git repository of your project will exclude the .project file. Also, the .classpath file and the bin folder will be excluded.