I have published a demo project in GitHub 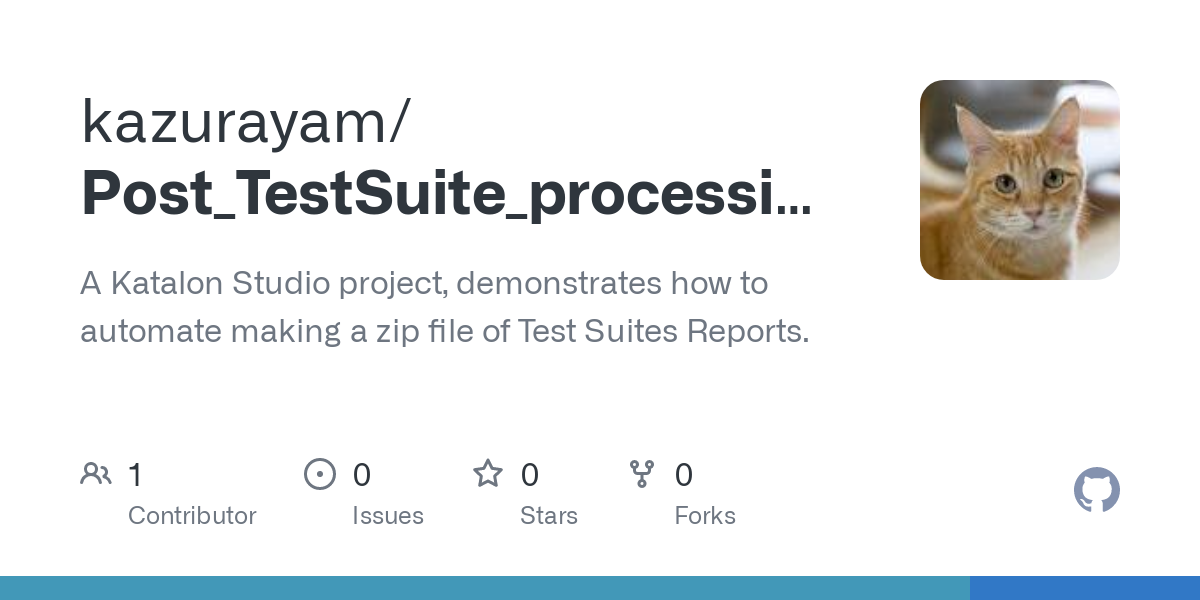 I used Mac. This project assumes that OS command /bin/sh is available, which is usually true on Mac and Linux. You should be able to rewrite this for Windows + PowerShell environment easily.

This project demonstrates how to automate making a zip file of Reports generated by a Test Suite execution.

Please download this project from Releases · kazurayam/Post_TestSuite_processing · GitHub , open it with your local Katalon Studio, run a Test Suite Collection named TSC . Just run it to see what TSC does.

However, Katalon Studio has a bug; the out folder, which is newly created by script, will not become visible in the Test Explorer pane. You need to close the project and reopen it. By doing so Katalon Studio will find the new out folder.

Why I developed this demo project? Let me tell it you.

Katalon Studio users often want to make a zip file of the Reports of a Test Suite execution. If you don’t mind doing it manually after a Test Suite finished, you can:

But I don’t like to do it manually. I want to automate zipping the Reports . Not only zipping, I want more. For example, I want to transfer the file to some remote storage for further processing.

How can I make it possible in a Katalon Studio project?

I found 3 technical issues that I had to overcome.

Unfortunately, it is not the case. When a @AfterTestSuite -annotated method invoked, the HTML/XML reports are not present there yet.

I can show you an evidence.

When you run the Test Suite Collection TSC , you should be able to find the following messages in the Console.

In order to write a script to zip a folder, the script must know the path of target folder. On the other hand, Katalon Studio assigns the path of a report folder for TS1 like:

As you can see, this path has variable parts (time stamp). How can my script find the concrete value of the variable folder path?

How to run a Command from Groovy

In order to create a zip file of a folder contents, I want to use the good old bash shell commands: zip , mv , cp , rm , mkdir , echo etc. Also I want to use curl command to transfer files over network.

com.kms.katalon.core.configuration.RunConfiguration class implements String getReportFolder() method. With this method call, we can get to know the report folder path of the current Test Suite.

Resolving how to run command from Groovy

The java.lang.ProcessBuilder class enables running arbitrary commands in a new process forked from Groovy script. The following article covers how to use it.

However I found that ProcessBuilder is difficult to use for simple use cases. So I have developed a small wrapper for ProcessBuilder named subprocessj .

The jar is already bundled in the Drivers folder of this Git project.

You can download the jar of subprocessj from the Maven Central repository.

The tutorial of subprocessj is here:

The source code of subprocessj is hosted here:

When you run the Test Suite Collection TSC and when the Test Suite TS1 has finished, the Test Listeners/PostTS1Processor will be invoked. It has @AfterTestSuite -annotated method. Please read the source.

What does the method do ?

In the out/consume_TS_Report.sh script file, I wrote a line of curl command to transfer the zip file to a URL (https://localhost:80), which will inevitably fail as the URL is not alive. This is just an example. You can do anything you like using shell commands here.

What this test case does? For the detail, read the source code.

@kazurayam looks nice
however, you can use the java.util.zip to create the archive, see:
https://www.baeldung.com/java-compress-and-uncompress
and whatever method you like to make a post request (predefined request object or build the request object dynamically)
with a bit or care, using those will make your project OS agnostic (a shell script is no longer needed)
you only have to pass the path of the Report folder from one suite to the post process one, here a simple temporary text file is good enough

Also, you can improve it a bit to take a list of report folders as input (let’s suppose you run more than one test suites and you zip all reports)

another approach (for just zipping the reports) may be to use a gradle task.
but here i cannot help much, i never played with custom gradle tasks in katalon
see: https://docs.gradle.org/current/userguide/working_with_files.html#sec:creating_archives_example

for the upload part, provided the gradle approach is working, can be something like here:

Gradle Script To call a REST Web service without any 3rd party plugins, any pointers?

The POC here may be a start:

Important This Proof of Concept (PoC) is not ready for production use. We recommend using this PoC for evaluation purposes only. Previously, Katalon Studio provides a Gradle Plugin to simplify...

provided one may find a solution to register a gradle task which executes after the report is generated,
you are in full control

I wanted to show a working example of “Post Test Suite processing” for their reference.

java.util.zip, Gradle, Ant — Yes, of course. You can use any approach to implement post-processing. Here I chose shell commands just because I love those good old one-liners. Zip, mv and curl still shine to me.

You are right. But it doesn’t matter to me very much. I know it is easy to rewrite this for Windows + PowerShell environment when I need it.

v0.1.2 enabled you to make a zip using PowerShell