Object Spy is not working

Please help to send me Katalon Studio logs in this case

Hi, I’m experiencing the same problem after downloading the latest version, 5.6.0, the Spy Web function is not working. It launches successfully, however there is no red border that appears when hovering over web objects and when trying to capture an object using “Alt + `” nothing happens. I then used version 5.3.1 to see if the issue persists, but it’s working on this version.

I have the same problem, I am using 5.6 version, Spy web and record web functions don’t work, there is no red border appears when trying to capture objects, and the “Record Web” function doesn’t actually record the actions the user performs on a web page instead it only records OpenBrowser and CloseBrowser items.

Hi,
I need to ask another question, how I can get the earlier version of katalon 5.5 to dowload.

When doing a web recording no objects are being captured. When I run Spy web and try to capture an object using alt+` nothing happens with latest version

I checked in Katalon Studio 5.6 on Mac with JIS Keyboard and found that I can not capture anything in Spy Web with Alt+`.

However, as http://docs.katalon.com/display/KD/Object+Spy+Preferences describes, you can allocate other key code for Spy Web’s Hot Key. So I allocated Alt+a and it worked OK.

As far as I see, Alt+` as Spy Web Hot Key never works for those who are using NON-US keyboard. Why? I have described my thought about this problem in the following post — it depends on Keyboard type you are using:

Spy web: Capturing by ALT+Backquote fails due to dependency on Language&Keyboard settings of OS Bug Reports

I regret that so many people who are new to Katalon Studio and who are using NON-US Keyboard get stuck (as I did previously) bacuase Alt+` does not work.

I tried to change to hot keys. But i can’t change since Capture object field is disabled…

Hey i changed to Hot key… it is working thanks

For me, do not run Katalon in admin mode (which means do not install in Program Files) also the green flash is verrrry slow. Not the animation the time to green flash. Also it does not work 100% of the time.

Why not you buy a new machine and try on it? Things may change.

Hi all… I changed the Hotkeys but selecting everything and then clicking on ‘Alt+a’ on the keyboard together and it changed the hotkey. And now able to capture objects in Chrome.
Thank you @kazurayam for the solution
Thank you @Ken for posting this question.
Been looking for solutions since ages

Hi guys, I’ve had to often restart Katalon to get Object Spy to work in any version. Of note though, in 5.8.6, I cannot save objects to the current folder, copy and replace does not work, I get a big red X. I’ve reported this before but have not had any feedback. I have been saving them to a ‘different’ folder then have to rename (if I’d wanted a copy) and drag them into the default page folder. THIS feature always worked in the past. It’s really frustrating to not be able to copy or replace an object in the default page folder now!

I know I late in the game, but I am also having the problem. Not able to capture the pop up window using Alt ~. I just updated the Katalon to the most recent version 5.10.1 and having this problem.

Can someone please give us a solution to how to capture the pop up window using object spy.

Read more about the release note.

I just upgraded it to 7.1.2. Object spy is not working, When I hover the mouse on the element, it won’t highlight red or green

Which browser did you use?

Thanks dears, I changed the Object Spy hotkey and it is working now.
you can change it from Window–> Katalon Studio Preferences–> Object Spy.
Click on Capture Object and press on Alt+a (or any combination you want) 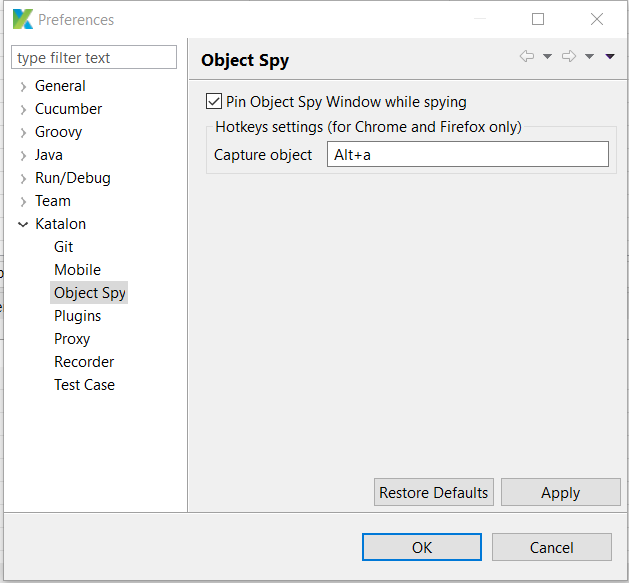