I made a quick investigation.

I took 1st screen shot and,10 seconds later, 2nd screen shot, and compared them and got the following imageDiff:

The video was properly moving. The video area in the ImageDiff file is painted 100% red — not very informative. You can see many unnecessary elements are compared — they are noisy.

7. compare screenshots - if they differ, video is running

This portion is not very easy as it seems.

this evening i’ll try to combine your solution with image search built in Katalon:

in case it’s working as i imagine (no documentation) we can search for 128x128px square of red to confirm video change.

I am going to try to utilize aShot’s feature: taking a screenshot of specified WebElement (the element), not the whole page.

cool… i’ll try my part when i came from work

I worked on this a bit more.

I used Visual Testing in Katalon Studio approach, with some amount of code changes. 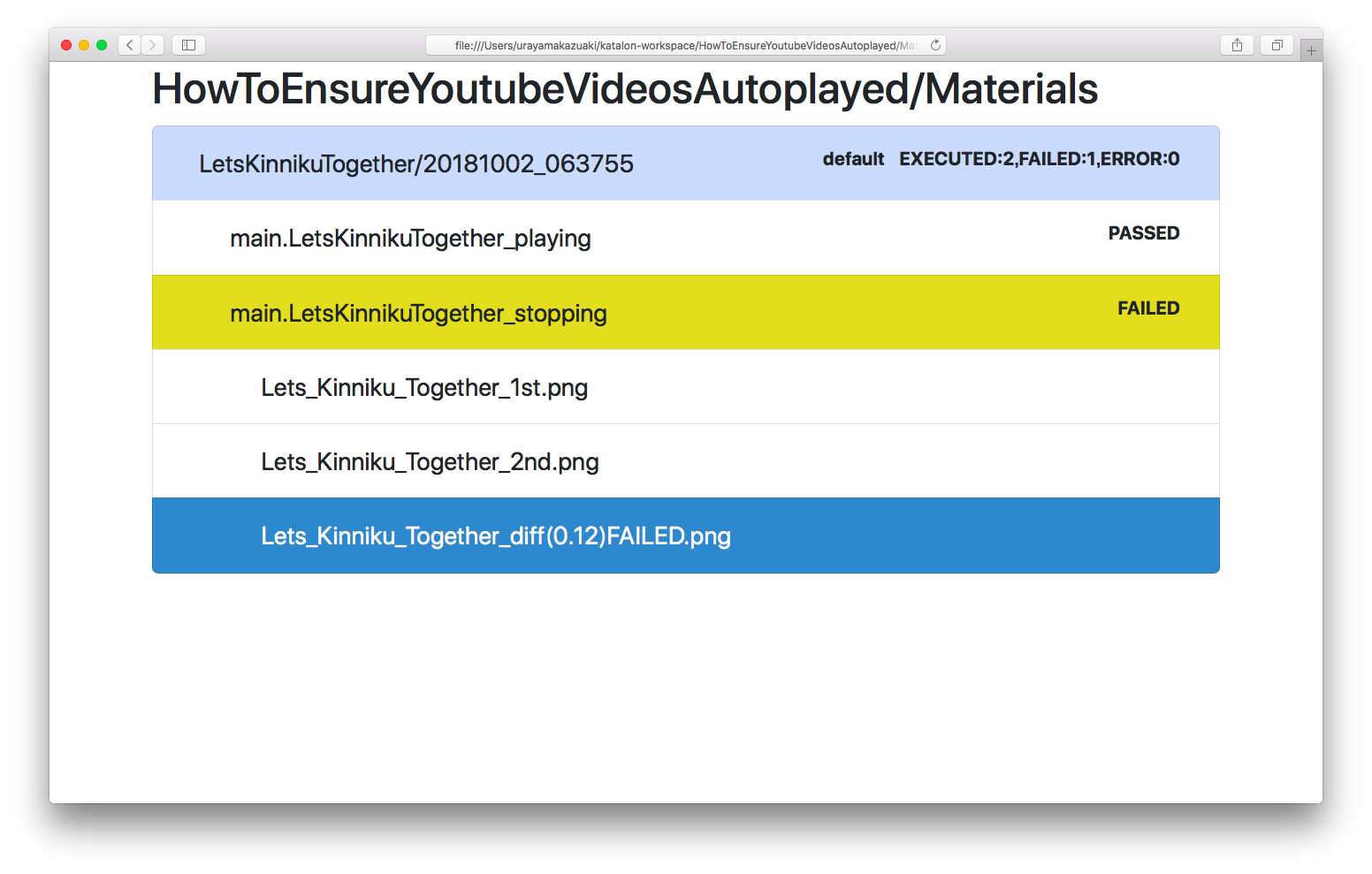 In the index, you can see

(2) a Test Case “main.LetsKinnikuTogether_playing” passed. “passed” means that the video was autoplayed. The video was verified by comparing 2 screenshots of

(3) a Test Case “main.LetsKinnikuTogether_stopping” failed. “failed” means that the video was not autoplayed, it stayed still. The video was verifyed by comparing 2 screenshots of

(4) You can see by clicking the PNG file named “Lets_Kinniku_Together_diff(0.12)FAILED.png” as follows: there is very little RED-painted portion, this means the video was staying still.

I felt a fun working on

I needed to change my code set a lot. So I am not going to expose the code set now. I will do it later.

There I wrote what I have done to verify a YouTube video autoplays or starts still. I found it is a difficult task. My study is far shot for satisfactory level.

Why to make it so difficult? When it is played, paused or error of someking on a youtube video, the name of one of the classes on the HTML is updated automatically.

When the video can not be displayed or available anymore:

Does it make sense?

Does it make sense?

I did not pay attention to the class attribute of youtube page at all. To be honest, I just wanted to play on screenshots.