Thanks for the plug-in. Could you please share a sample GIT project on how to use this plug in.

Testcases are already added in https://github.com/sukgu/shadow-automation-katalon-plugin/tree/master/Test%20Cases

@sushil106768 Getting the below issue when I open the cloned project in Katalon version -7.0 RC2

Also I tried to open the project in v6.3.3 but the plugin doesn’t load.

I have created another sample test project , please follow the link. Sample Testcase

@sushil106768 Thanks … But the sample script is failing in both firefox and chrome browser. 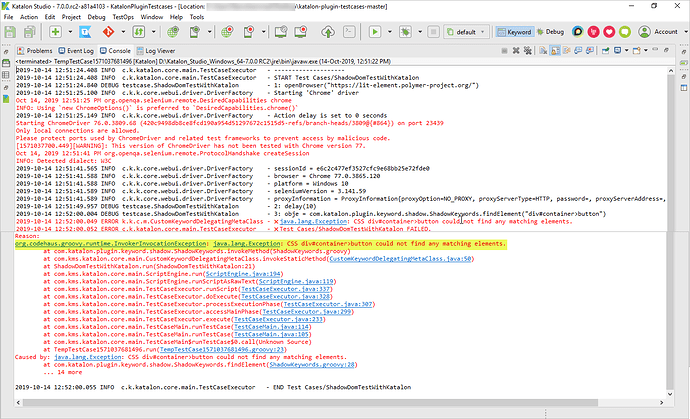 This solution is build and tested on Katalon Studio
Version: 6.3.3
Build: 11

So basically you are saying this was never tested with new version but it’s still on Store? Katalon team is obviously skipping testing of paid plugins with latest version.

I wonder how many plugins still work with latest version…

I have fixed selenium dependency issue and added implicit and explicit waits on shadow objects.
Issue descibed by @Luka_Mlikota is fixed now.

This is useless plugin. Nothing works on katalon version 7