I would suggest you to check with Katalon Developers on this forum. There might be just a configuration issue.

thank you so much for the help, manpreet.

also, if this could help, my test case has 113 variables and 303 lines of code

@Mateus_Gomes_Binatti I don’t think the number of Variables or Lines of code are culprit here. Lets wait and see what Katalon team has a solution for this ?

A very weird question ? Did you tried to reboot your computer and whats the configuration it has ?

Update your first post with ALL details pertaining to your system (OS, Katalon version, etc).

I will move this to the Bug Reports category.

@devalex88 @YoungNgo Can we have some heavyweight Kat heads take a look here? Thanks.

That’s so important I’ll say it again - Backup your files!!!

Determine if it is Computer/OS related:

Copy the whole project to another computer. Does the project behave okay there? If not, then the problem is likely inside your project or Katalon itself.

Determine if it is the project:

Start a new project. Does Katalon behave okay now? If so, it’s your project. If not it’s Katalon. (You could backup your projects and re-download Katalon and install again)

If it is the Project…

Start deleting profiles. Check Katalon after each deletion.
Let us know WHICH profile when it was deleted allowed Katalon to work correctly. @devalex88 will want to see it (and you still have a copy because you made backups, right?

@Russ_Thomas
hello, russ!
sure, i will do this right now!

dont worry, i have all on a git repository! haha. thanks for the advice!!

Determine if it is Computer/OS related:

i have the same issue in the computer that i used to work with, and my teammates give me another, but the problem persists!

Determine if it is the project:

ive created a new project and the problem persists!
ive already re-downloaded katalon, and tried older versions to see if the problem was the currently, but not.

If it is the Project…

the only profile is the “default”

In practical terms, 8GB of RAM is a little on the low-side for Win10 w/ Katalon. However, I do run my suites on the exact same setup without issue.

Just for reference, I use Win7 with 16GB RAM for Test Case development.

Did you try creating a new project on both computers? Did they both have the same issue?

One other question: On what version of Katalon did this problem first appear? I am wondering if it is worth trying an older version to see if the issue suddenly disappears (but not yet, let’s allow @devalex88 take a look at the rest of this thread first).

the only profile is the “default”

Post back the results (And turn your AV back on and reconnect to the network!)

“Did you try creating a new project on both computers? Did they both have the same issue?”

yes, russ, i created a new project on both computers! same issue for both!

On what version of Katalon did this problem first appear?

the file has the default configs, i cant delete and, always when i erase from “script view” and save, katalon put those lines back

ive done all of this and the problem persists

the file has the default configs, i cant delete and, always when i erase from “script view” and save, katalon put those lines back

By “empty it out” I meant delete all the variables (not delete the file itself).

Yet another “one more thing”…

When you download another version, are you copying it OVER the broken install? Katalon is a self-contained, standalone system - meaning, you can install many copies at the same time.

If you did copy over the old system(s) then please try again but this time, install it separately and run it from the new install folder. Understood?

example: when i change something in a test case, and save it, the ide freeze, starts to not responding and after something like 15 seconds it come back to normal.

This is what makes me think of AV or WinDefender.

A while ago (back when Win10 was new), I moved a development system (node.js and NW.js) to a shiny new Win10 system. The whole thing behaved exactly as you described. On Win7 it worked perfectly. When I blocked WinDefender from accessing everything in the dev environment (including Visual Studio and the publish folders) suddenly it started working correctly.

How are the permissions set on your project folder?
Is your user account local? Or does it come from a domain controller?
Are you opening Katalon with the same user account?

When you download another version, are you copying it OVER the broken install?

i downloaded the version, extracted the files and opened the katalon.exe from the new folder.
thats correct?

This is what makes me think of AV or WinDefender.

yeah, thats a point. but here we dont use AV, and win defender isnt blocking katalon,

How are the permissions set on your project folder?

how i check this?

i use the admin account, and i am opening katalon with adm user.

no problem, russ!
im so glad that you’ve tried to help me!

Maybe I lied. One last thing…

i downloaded the version, extracted the files and opened the katalon.exe from the new folder.
thats correct?

Yes, correct. And this leads me to strongly suspect your system (computer/OS) AND all other systems in your network where you tried it.

Rhetorical question: where are all the other reports of users with a similar problem?

Something on your computer is messing with you (and Katalon).

p.s. I now no longer think this is a bug in Katalon (moving again).

Hey guys, Katalon Recorder has started to become very slow and unresponsive when loading my saved test suites. It’s actually gotten to the point where I can’t even load my test suite at all - it just becomes unresponsive and then crashes the browser. Anything I can do?


Thats the only report that looks like my problem.

This is so sad, i really dont know what to do

Sorry for this issue. Please help us isolate the root cause. 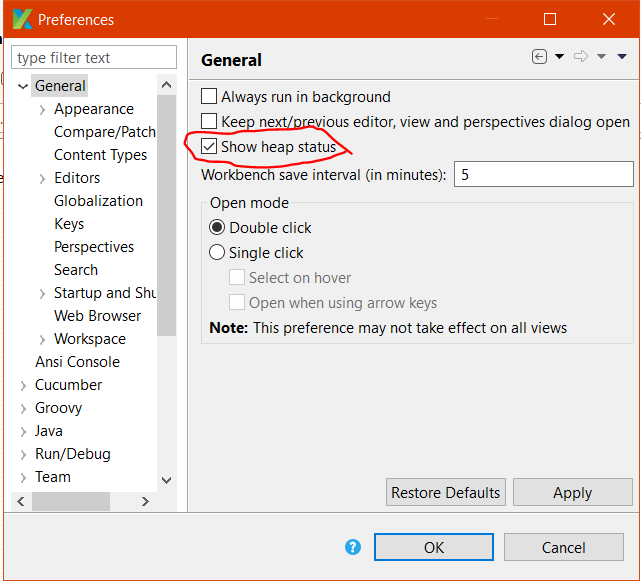 You should see then a small widget on the bottom status bar that shows how much heap memory is being consumed.

This file will tell us exactly what were stored inside Katalon Studio’s memory. 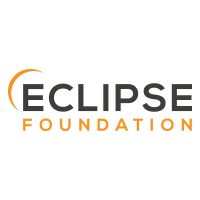 The Eclipse Foundation - home to a global community, the Eclipse IDE, Jakarta EE and over 415 open source projects, including runtimes, tools and frameworks.

Unzip, open it, and go to File > Acquire Heap Dump. 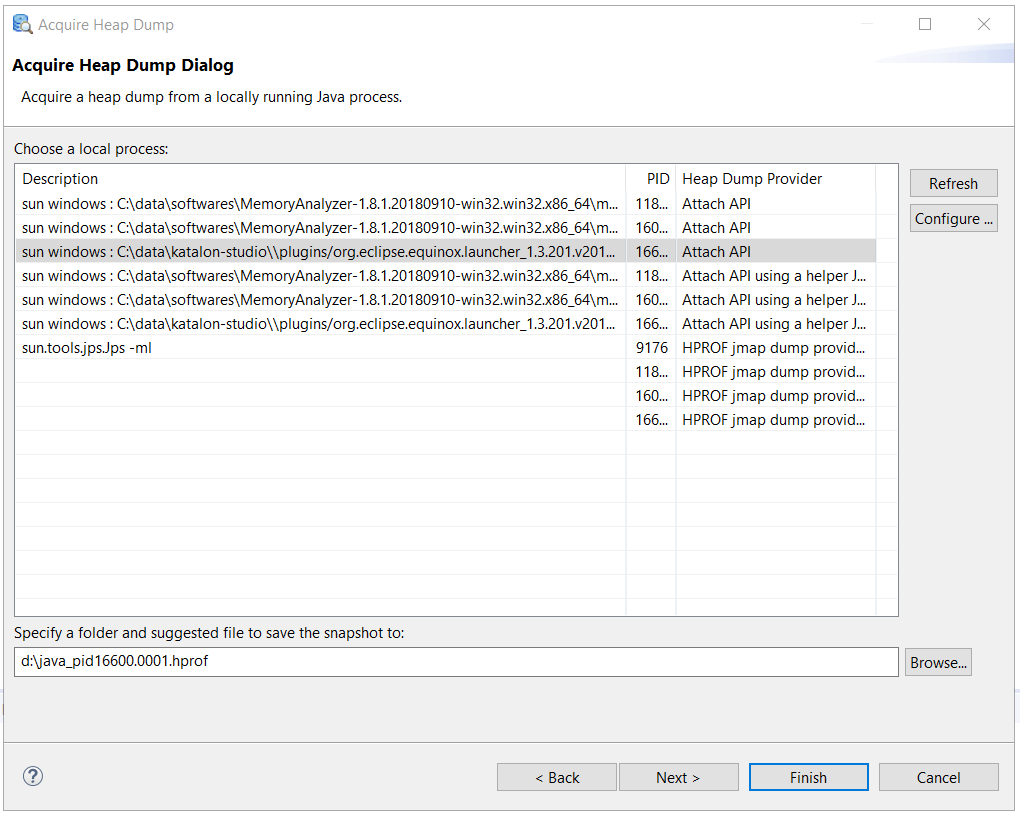 Make sure the file path points to a dedicated folder, because several files will be generated. Click Next, and then click Finish. 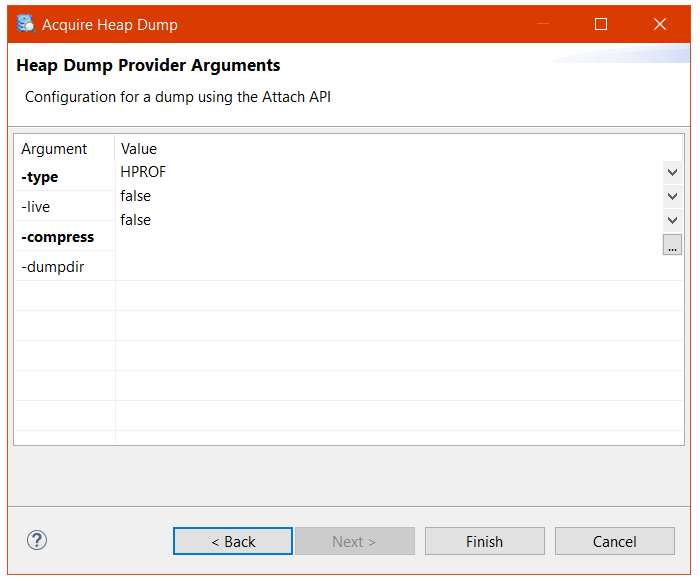 Then please send us (info@katalon.com) the *.hprof files.

thats the heap value when i opened my test case!

i am sorry, i dont know how to use it, but theres not java process i guess? 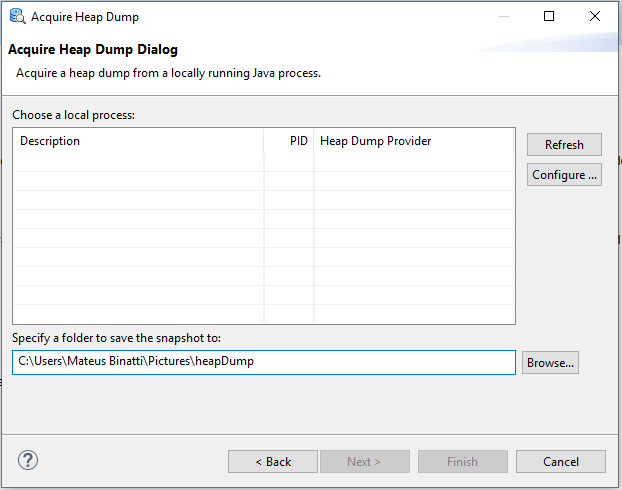 To solve this problem, i have to:
Increase the memory on -Xms (katalon.ini);

Now, i call this variables from the scope, so:

Now, my IDE is working fine!

Is it “Test Case Variables”? Can I say that if you hadn’t done this step, KS would’ve been not responding?