I have noticed that whenever I tried running my test case, it takes around a minute before it will run and Katalon Studio says its not responding.Maybe because I have too many test cases/object repositories or Internet issue?

It is highly appreciated if anyone can help me. 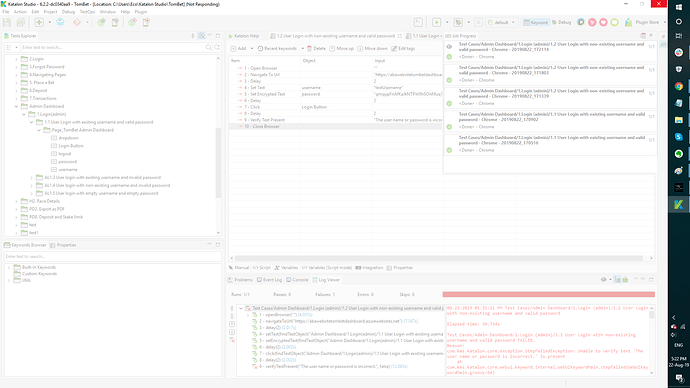 @sarah2 Can you try to use the latest version 6.3.2 to see if the problem is resolved? Because I see version6.2.2 in your side

@sarah2 what version of chrome are you using cos if it is V76, i am having the same problem and i plan to get chrome v74 which i believe works. did i mention that my KS was 6.2.2 and updated to 6.3.2 but still having the same issue?

@benjamin.emina I am now using the latest version of KS and my chrome is up to date which is v76, so far I was able to run test scripts around 2 to 3 sec which I think is okay unlike before that it takes a minute to run. I’ll just observed if same thing will happen in the future and update this thread as soon as necessary.

I noticed this insident as well.

Katalon Studio v6.3.2 looks hang-up (not responding to any event) for around 70 seconds when I clicked the green button to execute a very simple test case before the test case actually started.

What changes were introduce at v6.3.2?

At first everything went well, I was able to run around 2 to 5 sec this morning, but as I used KS eventually same problem occurred, it hanged up and takes a minute to run as what @kazurayam has observed.

Can you verify that in Preferences > Katalon > Web UI, the option automatically update Web Driver is disabled ?

I tried the same test case in 2 environments.

In both cases, I selected the option “automatically update Web Driver” is enabled.

With Proxy or Without Proxy — this seems to be a factor.

With automatically update Web Driver option On or OFF — this seems be another factor.

The combination of these 2 factors (behind Proxy, the Option of KS6.3.2 is set ON) makes KS hang up.

It is easy to guess what’s going on. Katalon Studio tries to connect to the download site of WebDriver binaries, but it fails to connect and wait for timeout because KS6.3.2 does not respect the given Proxy config.

Can you verify that in Preferences > Katalon > Web UI, the option automatically update Web Driver is disabled ?

I will check it on Monday.

As explained in the Release Note, Katalon Studio option “Automatically update webdriver” was introducued at v6.1.3-6.1.4.

I tested the following cases on Windows10, with a Proxy between my PC and the Internet.

In the upcoming releases we already have on our plan to modify this functionality so that users can have more powers in updating Web Driver, there will be progress bar which prevents Katalon Studio from being blocked and other types of measurements.

Thank you for investigation !

Everyone please try KS 6.3.3. We’ve replaced the option with a command under Tools menu to let users update the WebDrivers only when they want to.

Try running through the console. It’s much faster!

how do we roll this back? i hit update web driver for Chrome and now every test case in chrome fails

You can update Chrome or download the KS package again. The location of WebDriver binaries is documented here.

I’m not understanding where to get these from?
Location: