I just noticed that it fills 4 log files with errors starting with:

Followed by a few others before the repeating SWTerror.

Yes, I leave it open some days, when working on cleanup of objects.

I don’t edit Test Objects (don’t use them at all) but otherwise, yes, I have right now 13 (thirteen) tabs open. @devalex88 has seen how I use Katalon, stretched across two monitors. And yes, I’m convinced it’s unable to support so many editing windows open, it gets very confused. For example, I can’t execute a TC unless it occupies the tab at the far left, i.e., the one closest to the Test Explorer.

Yep, I wish we could do it all on client OS, but we are unit testing Dynamics 365 CRM and it has issues installing on client OS. Regression tests are all run from Win 10 client to QA servers.

same happened me too
NPE is bad bad bad

First indication I get is weird UI update issues…

We don’t have enough data to fix this issue, but we will add a button which you can use to dump debug information when freezing occurs.

Wish we could use VSC.

1 Like
Script mode can become jumpy with large amounts of variables and statements
danpoleary April 30, 2019, 5:37pm #12

I agree, What can a button do on a frozen UI?

To repeat this freezing have about 60 odd objects or test cases, now work through them, opening, editing, and closing. Over and over. Won’t take long to freeze.

Could anyone please follow these steps to retrieve and send us your heapdump?

Sorry for this issue. Please help us isolate the root cause. Enable heap memory report [image] You should see then a small widget on the bottom status bar that shows how much heap memory is being consumed. Collect Java heap dump This file will tell us exactly what were stored inside Katalon Studio’s memory. Download Eclipse MAT. Unzip, open it, and go to File > Acquire Heap Dump. [image] Make sure the file path points to a dedicated folder, because several files will be generated. C… 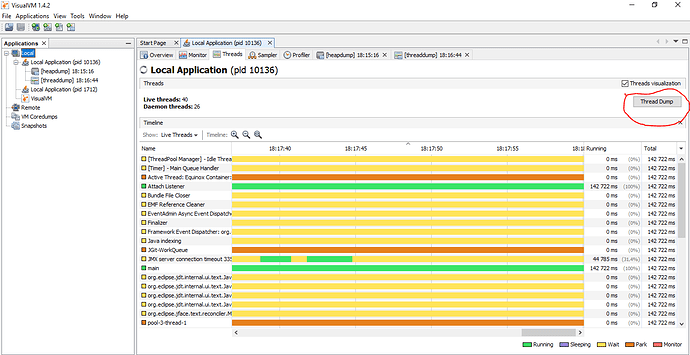 @devalex88 That’s interesting. Since turning on the “Show heap status”, I can watch Katalon’s use of memory. Here are my findings.

Today, same session, it’s at 673M of 2003M using the same files and after having clicked the trashcan. Anytime I see the left figure climb (perhaps showing ~1000/~2000) and I’m done running tests, clicking the trashcan will certainly cleanup memory. But again, there’s a slow residual climb for both figures.

So far, clicking the trashcan has certainly allowed me to keep Katalon open/stable for longer. However, the results reveal there is definitely one or more memory leaks somewhere.

I know, there’s nothing you can do with this info other than confirm Katalon has a leak issue.

EDIT: And now it’s still climbing and I’m doing nothing:

And look at the memory widget:

Up until this point I had been clicking the trashcan to run the garbage collector… but then I forgot for a while and bang.

I know a few people, including me, have been asking for a dark theme, but that’s not quite what I had in mind

Please try to retrieve the heapdump using Eclipse MAT. That will help us understand what had consumed all the memory.

Perhaps I wasn’t clear. When the crash happens, it’s very difficult to use any software on my desktop. Katalon is crashing so badly, it’s screwing with my display driver to a point that launching MAT and following those steps you posted would be extremely difficult - so difficult, it’s a non-starter for me. All I can do is ctrl-shit-esc (task manager) and hope to drag it clear to kill Kat.

What isn’t clear from my screenshots is all hell breaks loose when it crashes… flickering, weird updates, flashes of crazy colors, apps from different desktops show up (Dexpot: but they’re not truly there, they’re still on their proper desktop) it goes so crazy its hard to do anything beyond task manager.

. Can you take the heapdump before that point - like when it feels that memory can no longer be released?

I’ll do my best but I can’t promise to catch it in time.

One thing I have noticed - there’s a huge leak in the JobProgress window - close it or empty it and it costs you memory. That’s just crazy.

I noticed something that happens a short time before it freezes. My delete key will stop working in Katalon. If I keep editing various objects etc… it will soon freeze. I now restart Katalon as soon as the Delete key stops working.

This is very strange behaviour. I hope a fix comes out soon.

Has this been fixed in a later version? I am currently using 6.1.2 and am experiencing this issue multiple times a day. I’d upgrade to a new version if it was fixed.

The delete button in the editor does not work Bug Reports

It’s a bug. It happens a lot. In the menu, go to Window -> Katalon Studio Preferences -> General -> Keys and filter for “delete”, you will see that the Delete entry has no binding. Simply set it like this: [Image: http://192.168.1.4:99/wikis/work/images/katalon-delete-key-fix.PNG] Unfortunately, it will get wiped again. I have yet to figure out WHAT is wiping it – sometimes it survives for days, sometimes it’s gone within a few minutes of opening KS. Russ

Sorry this is late, I missed your response.

Hi. We’ve improved the memory usage of KS in version 7.0.