The release of Katalon Studio 5.8 introduces the new API/Web Service testing project with exclusive features including Web Service Quickstart wizard, Im___port Swagger 2.0_ or WSDL definition File/URL directly, or retrieve Request History at any time. This significantly improved allows you to separate the API/Web Service testing from Web UI and Mobile testing - less confusion for your projects.

The API/Web Service project is specialized designed to help you to accelerate automation tasks in Katalon Studio. The update also comes with a new interface, including a new toolbar and view that serve only for API/Web Service testing.

The QuickStart wizard allows you to quickly Import Swagger 2.0/WSDL definition or Create Draft REST/SOAP request o try out with different testing requirements. When importing web service definition, Katalon Studio will load specified information and populated into your project so you don’t have to spend time converting them manually. This wizard can be relaunched anytime in Help > Quick Start.

All web service requests sending in Katalon Studio are stored in the Request History panel in which you can retrieve anytime.

The web service request object can be added directly to test case from the object details view. There are two options available

Does this version support Xcode 10 ? As far as I know Katalon 5.7.1 had no support for the latest release of Xcode i.e. Xcode 10. When I was testing an iOS app on Katalon, I am facing an error (attached in image)

Does this version support Xcode 10 ? As far as I know Katalon 5.7.1 had no support for the latest release of Xcode i.e. Xcode 10. When I was testing an iOS app on Katalon, I am facing an error (attached in image)

This version does not support Xcode 10. It will be evaluated and supported in later versions.

Please help! This error below is what I have been getting over and over again whenever I want to run my script in Mozilla firefox. This error is what I got when I ran a sample project in katalon studio.

Hi can you tell us the name of the sample project ? Or a picture of the script of the test case in that project ? Looking at the error message however I guess WebUI.openBrowser(‘URL’) was not called ?

I really appreciate your prompt response. 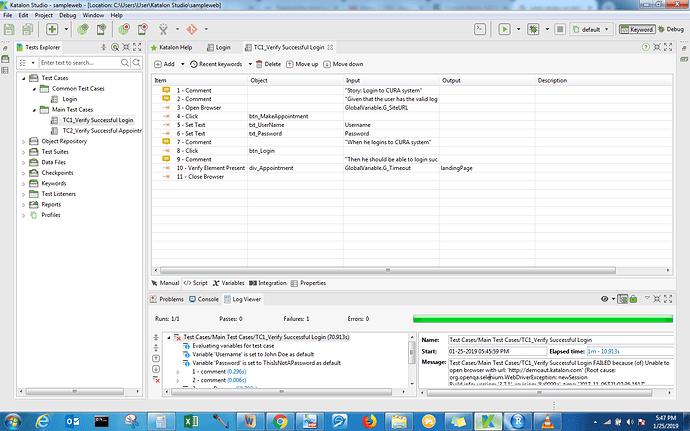 This is it. Could not load on mozilla firefox 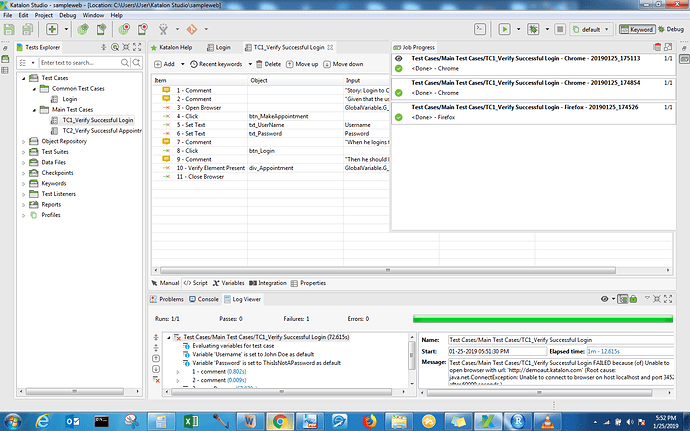 This is the case on chrome.

One more thing: Whenever I want to record a web page, Katalon is asking me to specify object first (which I don’t have prior knowledge of).