I don’t care, I don’t actively use it but I may need it one day

This seems to be caused by the missing libwebkitgtk3 library.
This library is last seen in Ubuntu Bionic Beaver, which will be End of Standard Support on April 2023.
Any other sane distribution (and Ubuntu newest releases) already dropped this package in favor of newest libwebkit2gtk4

Although it may require some effort to migrate Katalon Studio to the latest framework, fixing this issue may increase the base of potential users.

@duyluong this seems to be fixed in 8.0.0 alpha, perhaps the updated eclipse engine did it.
Good job, waiting for the stable release! 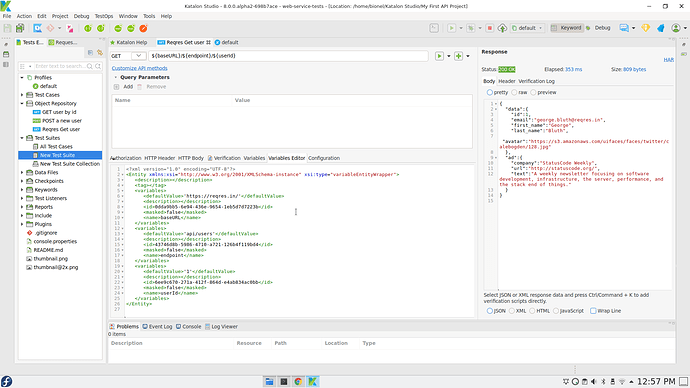 Having the system set with a general dark theme, Katalon is stuck, apparently when trying to open the popup expecting user confirmation for something like ‘are you new user’ (immediately after the activation step)

I set my global theme to a light one, launched katalon, selected one option and closed that window.
Now that popup won’t appear anymore, so I switched back to the dark theme and is working fine.

Could be related to this bug which I saw it mentioned in certain css file:

@duyluong @ThanhTo kindly pass this info to the dev team.
Until you figure out how to properly fix it, please disable this annoying ‘feature’ .

@duyluong this seems to be fixed in 8.0.0 alpha, perhaps the updated eclipse engine did it. Good job, waiting for the stable release! [katalonalpha]

As a side note, I am now on Fedora 34 (KDE Plasma) compared with the initial issue … but let’s move forward.

The team in charge with development of the Linux version perhaps should extend a bit the scope of testing, at least on various DE’s (Gnome and KDE as a must, because gtk vs qt) and trying various setups, e.g generic dark theming vs generic light theming vs gtk light but window manager dark and so on.
This can be done on Ubuntu flavors (and please use at least the current LTS) … but I won’t mind if also Fedora is included in the testing scope (that will cover also RHEL, CentOS, AlmaLinux and so on)

As for Desktop Environments target, Cinnamon, Lxqt, Mate and so on can be excluded at this moment from the scope of testing, since are just variants of one from above.

Thank you for the contribution as always.