Not sure if this will help, I’m not familiar with this API set.

In the linked discussion, @Ibus makes a point that you should use a JSON array object (and not a JSON object object): 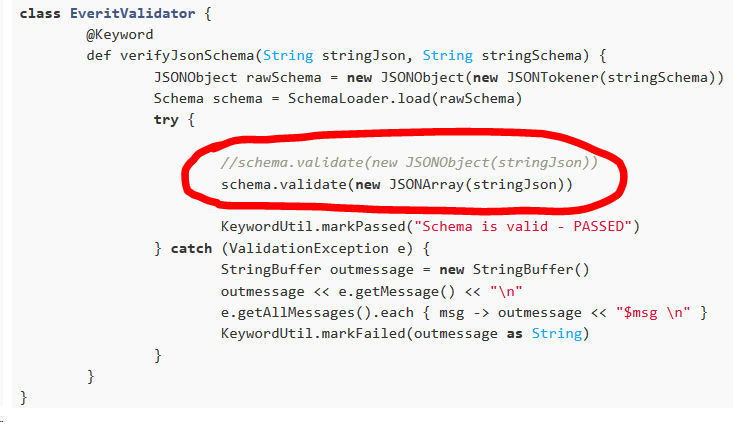 Hi Russ! I tried that when I was troubleshooting but it didn’t seem to make any difference. Thanks though!

@Morgan @Mihai_Augustin_Sarat
i will look into it … i no longer have kata installed but will do it tomorrow if the time allows
most probably with the new version some .jar’s are conflicting …

@Morgan can you please edit your post and re-format the log as /code mark-up to make it more readable? i think the forum plaform is js just using markdown, you have hints in the edit area and preview. pleaaase

@Russ_Thomas is a different case now

I guessed as much.

I did some research, and, as I was afraid the issue is created by the org.json library being added into the Katalon since … I don’t know exactly what version.
E.g, opening a sample project with Katalon 5.9.0 the following is generated into the project .classpath file (stripped content to the lines we are interested):

We have only json-20180130.jar grabbed by the everit.json as a dep and the test is running just fine.

Note that, in addition to the org.json lib we import into the project, we have also org.json_20140107.0.0.jar, the one used by katalon himself, which is an older version.
Unfortunately, Katalon is attempting to load that one … and not the one we need, therefore the error above.

So … we may have to summon other jedi master’s to help us in solving it.
@devalex88 @kazurayam any idea how can we convince katalon to compile/import at the TestCase runtime the right library from the project and not the one from Kata … and only for the keyword/testcase? Attemtping to replace the library in Katalon himself lead to crash, looking into logs looks like plenty of katalon libs depend on that one …

I’ve marked this as critical. We will work on this next week.

@Ibus thanks for looking into it

You deserve a nice cold beer. Maybe next time

Wow - thanks for looking into this @Ibus! Beers on @Mihai_Augustin_Sarat!

@Morgan @Mihai_Augustin_Sarat
let’s wait the issue solved to be.
strong is the force of dark in java, the path of deps hidden may be, young padawans …

Hey @devalex88,
Any news on when this is going to be fixed ?
Thanks.

from various logs posted here and there,i think jackson is already present in katalon. you will have to write a new keyword … but you can figure it out. i think it is still one wroted by me in one of the poc projects …

use the code samples to figure out how it works:
http://java-json-tools.github.io/json-schema-validator/2.2.x/index.html?com/github/fge/jsonschema/examples/package-summary.html

An alternative is here: Justify

I have made a demo project on GitHub https://github.com/kazurayam/JustifyInKatalonStudio Motivation JSON Schema is a vocabulary that allows you to annotate and validate JSON documents. JSON Schema is a nice tool for Web Service testing in Katalon Studio. As the post in Katalon Forum “JSON Schema validation broken after 5.9.0” reports, everit-org/json-schema once worked prior to KS 5.9.0, but as of KS 5.9.0 it does not work. Ibus reported the reason. For the time being, everit-org/json-schema…

Katalon Studio allows using external Java .jar libraries either through project settings or adding them to a designated folder. You can leverage this to extend the capabilities of Katalon Studio...