I have hunted around for an answer but didn’t see what I was looking for.

Is this possible? If so, how?

to create a global variable

No. There isn’t any Katalon API that creates a new GlobalVariable runtime.

However, there is a workaround.

The easiest workaround would be to declare a GlobalVariable of type java.util.Map<String,Object> in the default profile. Your test script would use it as a container of ad hoc variables. You can easily add/modify/delete key=value pairs in that GlobalVariable with java.util.Map API. You do not need any special library.

Delete “foo” if it exists:

In the above sample code, the value of “foo” property in the GlobalVariable.CONTAINER is a String. However you can put any type of object instances into “foo” because CONTAINER is declared as an instance of Map<String, Object>

I have ever developed a Custom Keyword that can create a new GlobalVariable entity in memory runtime. See the following:

However it is a bit complicated.

You wouldn’t need this, as GlobalVariable.CONTAINER of type Map<String,Object> would suffice for you.

Thank you for your response. I am have new to automation and had to put API testing on the backburner for front end automation. I don’t understand the steps.

When creating a new global variable 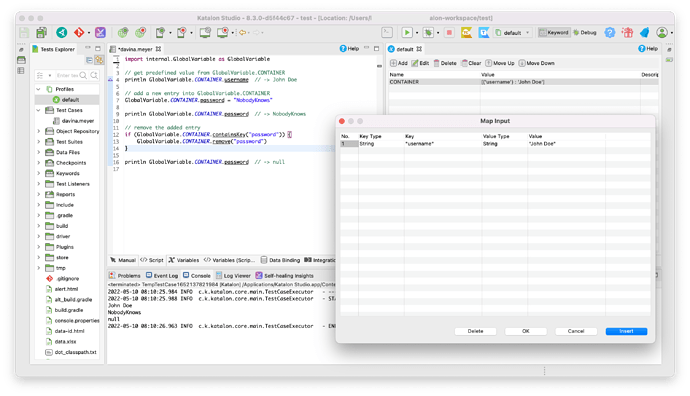 I have updated my GitHub project to v.2.0 Background GlobalVariables and Execution Profile is a feature in Katalon Studio that enable users parameterise values of variables out of test script source. With GlobalVariables we can reduce code duplication and reuse test scripts for multiple cases. The following screenshot shows how we apply Execution Profiles to Test Suites. [weCanApplyOnlyOneExecutionProfileBeforeRunningTest] As this screenshot indicates, a user has to choose a single Execu…

I am able grab the output string and use it in the next call in the test case.