Is it possible to search in Katalon as in Eclipse? 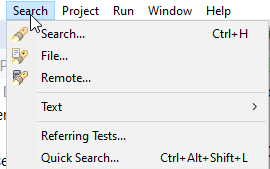 No, it is not possible. Not supported.

If it’s not possible, then WHY?

I personally never feel I need it.

I would rather ask you why you need it?

A Katalon Studio project is a folder with a composite of Groovy source codes (*.groovy) + XML files + *.properties files. All of them are text files. You can open a Katalon Studio project folder with your favourite Editor and do “Text Search” and “Text Replace” as much as you like. When necessary, I would do so using Emacs or Visual Studio Code. Be sure you don’t break the Katalon’s project structure when you do so.

When I open a Groovy source file in the Keyword folder, I can right click a method name of a class, select Reference > Project; then Eclipse Search feature shows the references made by other Groovy source codes in the project. 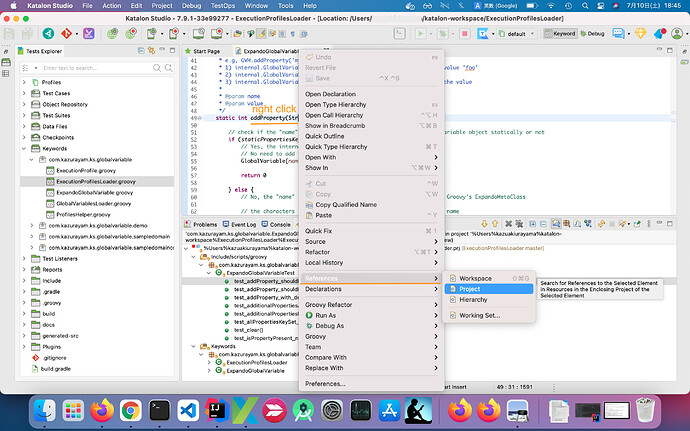 As you can see, the Eclipse Search feature is in action behind Katalon Studio.

But I do not find a “Search” feature for Test Cases. Though I would not need it.

kazurayam, I just put my observations about searching in my code and commented it out. In my previous comment, I just copied it directly from my code to give some context helping to understand what my comments are about. Still it looks better after you use the Markdown code formatting. Thanks.

Are you aware that you don’t have to call your Keyword classes indirectly via CustomeKeywords?

If you write your code in this simpler way, the Eclipse built-in “Reference > Project” feature in the Script mode editor will work for you.

If you write your code in CustomKeywords."..."(...) format, unfortunately, the “Reference” feature loses its power.