Error on service request, have updated the variable in profile as used variable in filepath
Works well with if direct path applied(without variable)

What is the test STEP that is failing? Show us more of the error…

Are you running on Windows?

No. Just checking. Once again it seems to indicate the colon is a problem but once again it’s getting the index wrong - before it was 3, now it’s 2. It should be 1.

Whether java.nio allows them is another matter entirely…

It’s reading \u as an escaped character.

Okay, let’s get some more eyes on this…

Okay, let’s get some more eyes on this

its a Bug confirmed
if used variable as String

it works
but with list it is not working 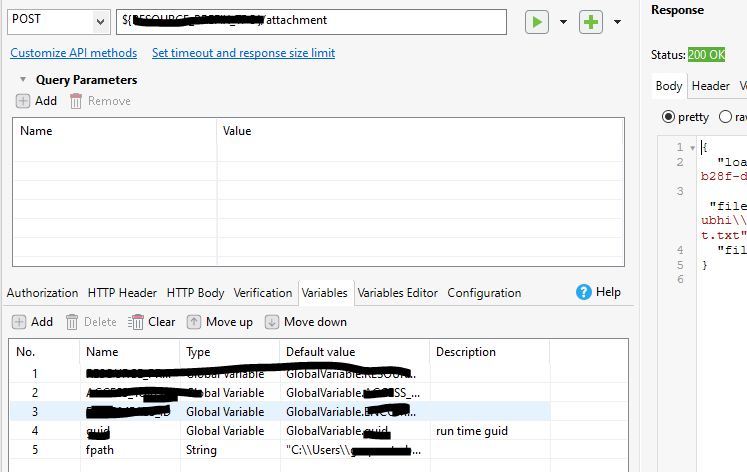 This is the whole reason why you got the Exception. I guess internally there runs a code like this:

this will cause the method to raise an Exception if the valueAssignedInTheGUI variable is of type List.

Katalon Studio seems to offer List and File type as variable type but I guess KS is not defensive enough. When a variable fpath is declared as a String, and if the value given is [C: ..., then Katalon Studio GUI should check the validity, find error, and show a modal dialog which warns (before executing the test script)

“a valid file path string is required, but [C: … is not, it looks like a List literal. Type mismatch”

It is too late to raise an Exception saying shortly “Illegal char <:> at index 2” that puzzle us.

And I do not see which data type @gsp wants to declare for the variable fpath; String, List? He should chose one. Otherwise he can not decide how he should write a literal as its value: C:... or ["C:..."].

By the way, if he chooses File type, then how he should write the value in the GUI field? — I have no idea, as Java/Groovy language dos not define “a literal for File type”.

I would suggest to him: don’t use List and File type as they introduce more troubles than helps. Use String. Simplicity is golden.

By the way, we can read the source of com.kms.katalon.core.util.internal.PathUtil class at

When I found this, I wondered why Katalon Team reinvented a wheel; as you know, Java 7 supported java.nio.file.Path.relativize(Path other) and toAbsolutePath() . Possibly the PathUtil class was initially written before Java7 which was released July 2011.

And I do not see which data type @gsp wants to declare for the variable fpath ; String, List?

Any help from you ?

You should make a search in this forum with keyword “upload multiple files”.

I found a few topics, for example:

Perfect, thank you. Try this solution: String path1 = "path/to/first/file"; String path2 = "path/to/second/file"; String finalPath = path1 + "\n" + path2; WebUI.uploadFile(findTestObject("path/to/my/object"), finalPath); You will need to replace two file paths, as well as the path to your test object, with your actual locations. If this doesn’t work, we’ll do the same thing, but replace the WebUI method call with a Selenium approach.

If you are to take this approach, in GUI, you are supposed to use String type for the fpath variable, you would not use List.

I haven’t tried this approach. But, I guess, you would find a problem. WebUI.uploadFile() keyword requires 2nd argument of String, which contain multiple file paths delimited by a NEWLINE character: path1 + “\n” + path2 + “\n” + …

How, in the GUI field, can you insert a NEWLINE (\n) character in the string value : path1 + “\n” + path2? I do not know any immediate answer to this. Please try to help yourself.

I think WebUI.uploadFile() keyword is poorly designed. It should rather accept 2nd argument of List<String>.

@gsp
You may want to invent your own custom keyword which accepts 2nd argument of List, for example

I noticed, @gsp wants to work on WS, rather than WebUI. He wants to attach multiple files in a WebService request.

I searched this forum and found some relevant topics. For example.

API upload form-data posibble to have multiple files at one object? Katalon Studio

I have a test object to upload form-data. and i have multiple files for test data, is that possible to have multiple files at one object? if possible, how do I call them in test script? my current script: def response = WS.sendRequestAndVerify(findTestObject(‘Web Service Request/testinvalid’)) WS.verifyResponseStatusCode(response, 201) [image]

@gsp would want to develop a Tese Case and a custom Keyword that drives RestRequestObjectBuilder.withMultipartFormDataBodyContent().

@gsp has got fair amount of development works to do. Enjoy!