Grant and Use a Katalon Runtime Engine Offline License

Feedback & Reviews Documentation
system January 9, 2020, 8:34am #1
This is a companion discussion topic for the original entry at https://docs.katalon.com/katalon-studio/docs/re-offline-licenses.html
habasse.traore August 25, 2020, 11:09pm #2

Does anyone has faced the below 2 ?
No1
I signed up for the Katalon Runtime Engine (Node-locked) monthly license but was not able to generate an offline license or add a machine Id.
Do you need to have Katalon Enterprise agreement before being able to create an offline runtime license ?
No2
I currently have a Katalon Runtime Engine (DevOps) and I wanted to use Katalon has part of our existing pipeline for testing but our pipeline tool is Concourse.
I’m able to run the Katalon docker cmd on my system to execute a script saved in GitHub but when I try to do the same inside of Concourse pipeline I get a Online License error regardless of the fact that I have a DevOps license. I also tried with the Katalon script saved locally but I still get the same license error. So far I’ve not seem any documentation around using Katalon with Concourse CI so wanted to confirm is this integration is even supported or would be. Provided screen shot of the error for reference 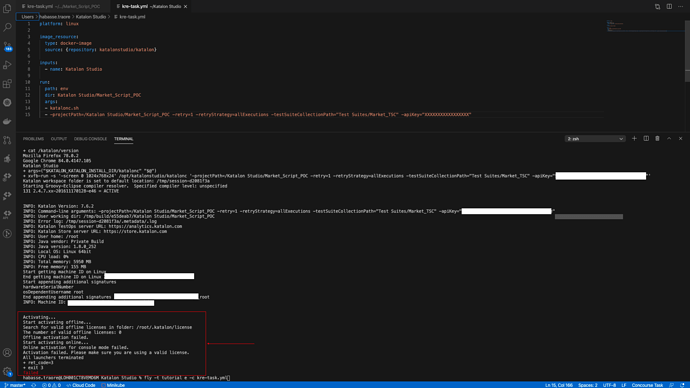 1/ Only annual KRE license can be converted to an offline license, as noted in this documentation:

Getting following error while trying to use license with Circle CI:

I am having very tough time getting any kind of technical support for katalon and having anyone answer phones on their company. I have purchased licenses that are practically USELESS since there is no technical support to assist with the usage.

Have you used our Zendesk Support and submitted a ticket there ?